Posted on March 8, 2018 by Gypsy Gallardo in News, Uncategorized 0 Comments 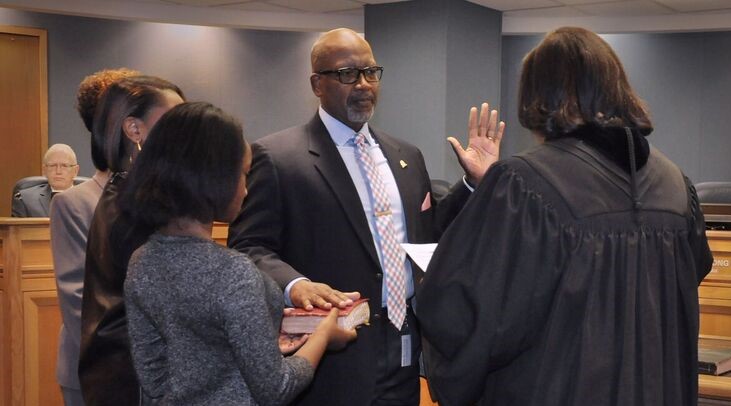 Above: Pinellas County Commissioner Ken Welch and family at investiture ceremony marking the start of his term as Chairman of the Commission

The action stemmed from Welch’s prioritization of the issue during his one-year term as Chairman of the County Commission. As part of his push, he’s called on county leaders to find strategies to overhaul the county’s SBE program, after nearly 20 years of race and gender-neutral policies that sought to target purchasing to small businesses of all kinds.

But a 1999 “disparity study” commissioned by the City of St. Petersburg resulted in a wholesale shift in the practice. The study found that a representative share of the city’s spending went to black-owned and other minority-owned firms. Hence, the thinking went, there was no longer a need for affirmative actions to remedy disparities.

In response, both the City of St. Petersburg and Pinellas County opted for SBE programs that – as of 2002 – no longer tracked or targeted procurement to ethnic minorities or other special groups.

Over time, the shift had disastrous results for small businesses on the whole, and minority-owned firms in particular. For example, in 2017, Pinellas County government spent about $400 million on the purchase of goods and services, but only about $60,000 of that was spent with SBEs, according to a report by county staff.

Now, after 16 years, the county’s SBE policy is on the drawing board for major revisions.

One route would be to enhance the current SBE program to more rigorously track spending with small firms, and to rev up registrations of diverse firms with the county’s procurement staff.

The second, more expensive option, is to commission a countywide disparity study, which could enable the county to set specific goals for procurement among minority-owned and women-owned firms, if disparities are found.

The latter would cost an estimated $300,000 and require up to two years to conduct the analysis.

While both options are still on the table, Welch says the county isn’t waiting for an up-to-date study to begin making headway.

For starters, the county plans to hire three new staff to increase outreach and procurement among diverse small business owners. Approved investments also include creation of a new database of small business owners, to reach them more readily. The absence of one has been “part of the problem,” according to Welch.

Welch is working on expanded partnerships as well, such as partnering with Pinellas County Schools in hiring services for their construction projects. Last year, the school district hired Creative Construction, Inc., to rebuild Melrose Elementary. The construction company then shared the work with other local subcontractors for concrete work.

He, Flowers and Wheeler-Bowman are also coordinating efforts with the City of St. Petersburg, where staff and Council members have taken several steps toward revamping its SBE program over the past two years. The three co-hosted a business information session in South St. Petersburg in late February to introduce local government purchasing programs.

“The commission, for the first time that I can ever recall, has unanimous consensus that this needs to be a priority,” Welch said. “We’re going to be more aggressive about it.”

He urges local businesses to get prepared to engage once the new policies are in place. “If we’re going to succeed in creating a more inclusive economy, it’s imperative that small business owners take advantage of the information, outreach and business support.”

County Commissioners will continue discussion about the overhaul at a March 13th meeting (start time 9:30 a.m. in commission chambers at the county courthouse)

To find out more from Pinellas County’s Economic Development and Purchasing departments, head to pinellascounty.org and click on the business tab.

To watch the Board of County Commissioner’s full work session on the issue, click here.