The Gillum effect? In Florida’s largest black-majority city, a surge of early voters

Posted on November 1, 2018 by Gypsy Gallardo in Candidates, News, The Black Vote 0 Comments 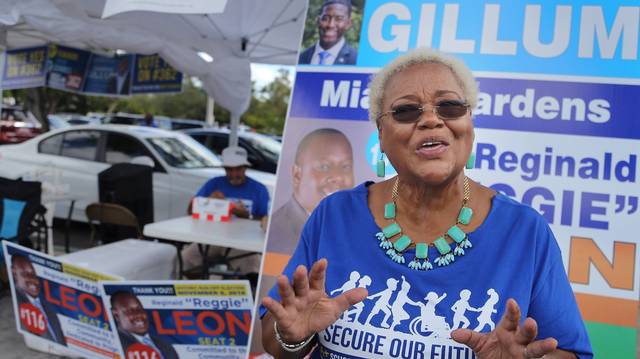 Anita Coolie, 46, cast her vote Wednesday in Miami Gardens for the Florida governor’s race, but her mind was on ballots of elections past.
“It reminds you of history, like when we had the first African-American president,” the city custodian said after voting for Andrew Gillum, the first black candidate from a major party to run for governor in Florida. “People like to get that sense of history.”

Coolie’s election-season visit to the North Dade library in Miami Gardens may extend a notable streak for the only early-voting site in Florida’s largest black-majority city. Since the weekend began, the library is the only one out of the county’s 28 early-voting sites to actually see more voters than it did during the same four-day stretch during the 2016 presidential election.

For all the talk of blue waves, President Donald Trump’s energized Republican base helping GOP nominee Ron DeSantis, and record turnout for a governor’s race, the 2018 mid-term election isn’t coming close to the pace voters set in 2016.

That’s typical for “off-year” elections, the term for the national elections that fall in the middle of a presidential term. While turnout topped 70 percent in Miami-Dade when Trump faced Hillary Clinton in 2016, it simmered around 40 percent when Gov. Rick Scott ran against former governor Charlie Crist in 2014.

Following heavy turnout in the August primary, Miami-Dade’s Elections Department expects this off-year election to break records in the mid-term category and generate 60 percent turnout. Through Tuesday, early voting is up more than 160 percent from its 2014 levels with more than 155,000 ballots cast in person. In fact, by the time polls closed Monday more people had voted early in 2018 than had in all of 2014.

But even with a quickened pace, the average early-vote site in Miami-Dade is down 41 percent from its 2016 presidential pace. Then there is the North Dade library, where the overall drop-off from two years ago is just below 18 percent. That’s the lowest in the county.

For the four days that ended Tuesday, 393 more voters turned up at the North Dade library than did in 2016. Every other early-voting site in Miami-Dade had a deficit for those four days.

“Most people are coming in here to vote for Gillum,” said Elizabeth Judd, a political consultant broadcasting a slate of her preferred candidates from a tent set up outside the North Dade library. “Everyone else is an afterthought.”

So far, Republicans are ahead in early balloting statewide. Through Tuesday, about 3.4 million ballots have been submitted in person or by mail. About 42 percent have been cast by Republicans and 40 percent by Democrats. Voters without a party make up almost all of the rest, leaving independents to sway what’s looking like close elections for governor and in the Senate race between Scott and the incumbent Democrat, Bill Nelson.

In Miami-Dade, about 340,000 people have voted through mail-in ballots and early-voting in person. Democrats have cast 44 percent of the ballots, and Republicans 35 percent of them. That leaves about 21 percent for people without party registration.

The totals give Democrats the advantage, but Republicans actually have the enthusiasm edge since they make up only about 26 percent of the county’s 1.4 million registered voters. While Republicans are overperforming in Miami-Dade so far, Democrats are roughly matching their 44 percent share of the electorate.

Gillum spent part of his childhood in South Dade, and now serves as mayor of Tallahassee. DeSantis, a former congressman from Palm Coast, picked a Miami-Dade lawmaker representing Kendall as his running mate, Rep. Jeanette Nuñez.

Joe Martinez, a Miami-Dade commissioner from the same area, has been campaigning with Nuñez and said he’s skeptical that Democrats are going to show much more interest in an off-year election than Republicans will.

“It’s the same thing as always: lukewarm,” Martinez said of voter enthusiasm. “But it’s been lukewarm for years. I think the media has enthusiasm for Democrats. But I don’t see it on the street.”

Miami Gardens is hardly a battlefield, since it’s a heavily Democratic area that gave Clinton three of her five best Miami-Dade precincts in 2016. (In one, Clinton received 1,184 votes and Trump got 35.)

Heavy turnout for early voting also doesn’t mean anything will look remarkable once the final votes are counted. In 2016, Democrats were encouraged by strong turnout early only to see a lackluster showing on Election Day, said Steve Schale, a Democratic consultant in Florida.

“Election Day turned out not to be as robust as people thought it would be,” he said. “On Election Night, a lot of pundits kept saying Florida was still in play because so many precincts in South Florida hadn’t reported yet. But most of the voters in those precincts had already voted.”