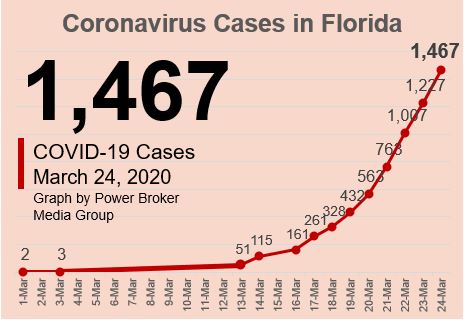 Data through March 19 from ClickOrlando.com timeline; for March 20 onward, data are from Florida Department of Health

This evening, state health officials report 1,467 Coronavirus positives across Florida, an increase of 240 cases over last night, making this the second biggest single-day surge in new cases-on-record since Florida’s first cases were identified on March 2nd.

Governor Ron DeSantis is still declining to issue “stay at home” orders, while at least two local mayors appear on the verge of doing so.

St. Petersburg Mayor Rick Kriseman held an afternoon briefing signaling that his administration is still considering such an order. He is on record calling for Governor DeSantis to proceed with “stay at home” restrictions.

The case count in the Tampa Bay region climbed by 18% today (over yesterday’s counts). By day’s end, Hillsborough County has 95 cases, Pinellas County 45, Polk County 13, Manatee County 16, Sarasota 26, and Pasco 16. Among these counties, two deaths are reported (1 in Pinellas and 1 in Manatee), which remains unchanged from yesterday.

The health community has now administered 16,046 tests across the state (up 2,351 since last night). Some healthcare leaders advise that continued testing will cause the case counts to climb in the coming days, but that containment efforts may, in fact, be working to stem the spread.

Meanwhile, a petition urging Governor DeSantis to #ShutDownFlorida has garnered 171,000 over the past two days. The push was initiated by Julio Torres at Change.org. To lend your voice, sign the petition at this link.

To share news, views and requests for information with us, email reachout@powerbrokermagazine.com.