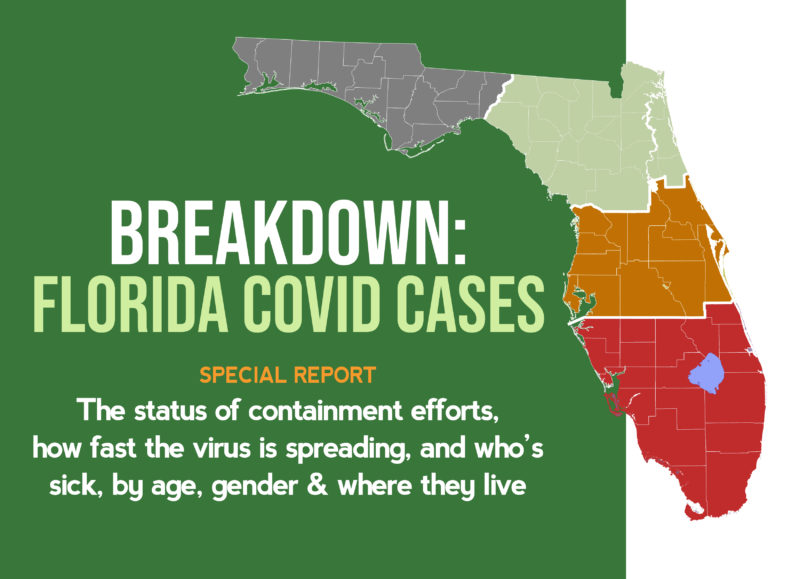 As of 10 AM today, state officials showed 3,763 Coronavirus positives in Florida. The contagion rate over the rest of this weekend may give a strong indication of whether Florida is doing enough to flatten the curve or whether we continue on-pace to skyrocket to a 90-degree slope in case count growth. Florida’s fate urgently depends on whether her 21+ million residents heed local government orders (even in the absence of shutdown directives by Governor DeSantis).

This special report offers a snapshot of the status of containment efforts in the hardest hit counties, as well as how fast the virus is spreading, and who’s sick (by age, gender and where they live).

Ten Florida counties with highest count of COVID-positive people claim 79% of all cases in the state. South Florida is far-and-away the hot bed for the contagion. The tri-county region is home to over half (56%) of Florida cases.

The Tampa Bay region is second hardest hit. The six bay area counties tracked by Power Broker Media are home to 429 cases or 11% of the state total as of 10 AM today. Two bay area counties rank in the top 10 for COVID-positive people – Hillsborough (ranked 4th with 195 cases this morning) and Pinellas (ranked 8th with 94 cases). 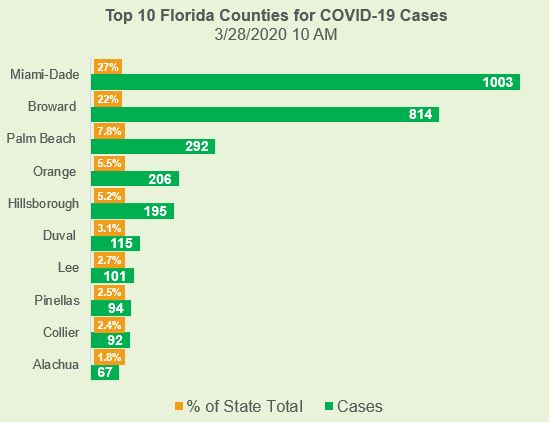 Over half of the top 20 cities for highest case count are in South Florida (in Miami-Dade, Broward, and Palm Beach counties). The Tampa Bay region has one city in this hardest-hit list (Tampa, in Hillsborough). 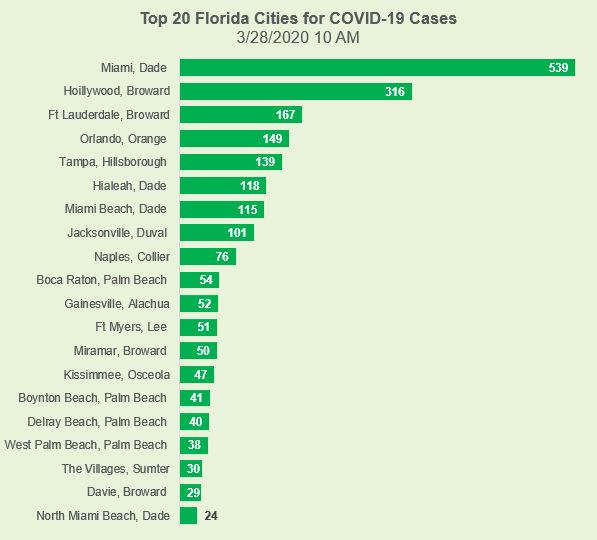 The extreme shortage of test kits makes it impossible to know the true count of COVID-positive people in Florida, but the rate of case growth quickened in recent days. This graph of end-of-day counts through Friday March 27th shows a steepening curve of total cases and acceleration in new cases day-by-day. 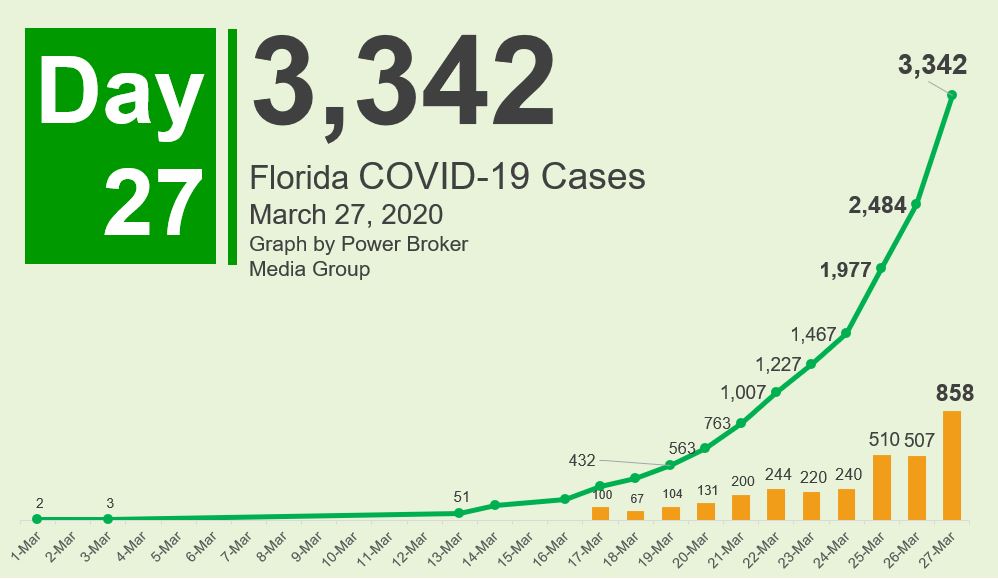 A groundbreaking report by FloridaPolitics.com found 26 counties that had containment orders either in-effect or in-the-works, including “stay at home,” “safer at home,” or more limited orders that apply to certain times and spaces.

But there is a mismatch in the strictness of policy and severity of the contagion (by place). In 20 counties with the highest case counts, five don’t have any restriction policies in place, and several have only limited restrictions for their residents. 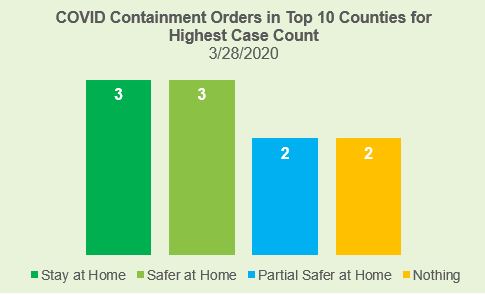 Even more troubling, several of the top 10 counties have orders set to expire soon. Palm Beach County’s quasi-safer at home policy is effective for only 11 days (March 20 through March 31st); and Orange County’s stay at home order is effective for 14 days, March 26 through 11 p.m. April 9. This is despite the fact that the two counties rank 3rd and 4th respectively for most cases in Florida.

Men are suffering in larger numbers. Across Florida, 54% of COVID-19 positive people are males and 43% are female, while 3% are “unknown,” which could include people who self-identify in non-traditional gender groups. The FDOH still uses binary gender coding, reporting only on male and female groupings. 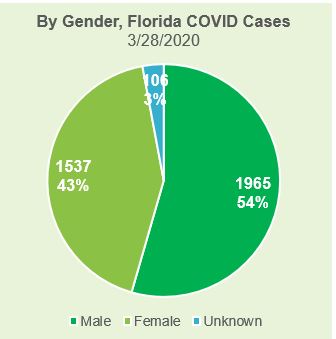 There are two glaring facts in the FDOH’s data on the travel history of COVID-positive people. One, among those whose recent travel is a known factor, three out of every four (75%) had recent travel experiences. And two, health departments across the state are not stringently capturing data on travel history for people testing positive. This morning’s FDOH report shows travel “unknown” for 1,600 infected people. That’s 44% of cases statewide, leaving officials with a blind spot about the pattern of contagion. 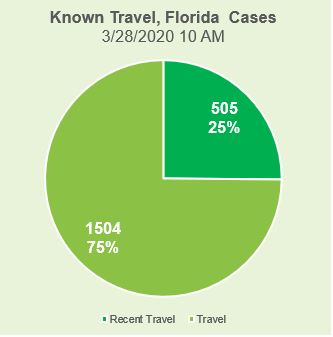 People infected with the virus skew older; 61% are age 45 and older and 39% are younger than 44. The state had 36 cases among people under age 14 and no deaths in this age bracket so far. The lion’s share of Florida’s 54 virus-related deaths were in the elder population; 89% of deaths are among people over 65+. 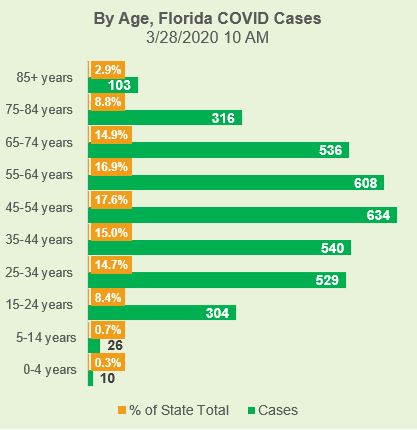 This analysis was done by Urban Market Analytics, a division of Power Broker Media Group. To share news, views and resources with our team, email reachout@powerbrokermagazine.com.