Posted on April 6, 2021 by Gypsy Gallardo in News 0 Comments

ABOVE: The Graham brothers present their firm’s ability to successfully execute public-private projects; HORUS is one of the largest black-own construction firms in the Southeast U.S.

– Gypsy C. Gallardo, for One Community and Power Broker magazine

The Graham family has built one of the largest black-owned construction firms in the Southeastern United States but had never – until now – had the opportunity to serve as a prime contractor in St. Petersburg, the city their parents made home in 1968.

Last December, their firm – HORUS Construction – was selected through a competitive bid process to handle the design/build contract with the City of St. Petersburg for the Sankofa Vision, one of four components of the City’s Deuces Rising plan to accelerate revitalization along the 22nd Street South corridor (affectionately known as “the Deuces”).

And next Thursday, April 8th, St. Pete’s City Council will vote on whether to approve phase 1 of what is believed to be the largest construction contract ever awarded to a black-led firm in the City’s 133-year history.

The Sankofa Vision entails new construction of 26 townhomes and 28,000 to 35,000 square feet of commercial space that will cost roughly $17 million, according to preliminary estimates.

Though there will likely be larger contracts for minority-owned firms on the 86-acre Tropicana Field Redevelopment Project, this is a full circle moment for the Grahams, and an historic marker for the City, which shuttered its minority business procurement program in 1999.

Prior to now, the largest City-awarded contract to a black-owned firm might have been on the original Tropicana Stadium development project, according to several elders contacted for this article. The project lasted three years (1987 to 1990) and its largest contract to a black-owned firm might’ve ranged from $750,000 to $1.5 million in antique dollars ($1.7 to $3.3 million in today’s dollars). I will continue to research the question.

But if City Council approves the contract with HORUS on Thursday, not only is it likely the largest such contract to date. It may also be the first time St. Petersburg has awarded a contract to an all-MBE team.

HORUS, the prime, is 100% African American-owned firm, and will partner with Howard & Associates as architect and Volt-Air for mechanical, electrical, and plumbing engineering (both also black-owned), along with Master Consulting Engineers (a Hispanic-owned firm).

Jonathan and James Graham founded HORUS Construction in 2001 (Jonathan, the youngest of the family’s three boys, as President, and James, the eldest, as Director of Operations). Since then, HORUS has completed over 200 commercial projects in 8 states, including 15 international airports, theaters and auditoriums, schools, bank branches, retail plazas and mixed-use projects.

Despite the firm’s award-winning track record, HORUS had never won the opportunity to lead a project in St. Petersburg. Not for lack of trying.

“We’ve done over 50 projects for Hillsborough County Schools, right across the bridge, but could never break through to win a project in St. Petersburg. We’ve been a sub-contractor on several projects in the city, but never the lead,”

When asked for his opinion as to why, James says he and other minority contractors see St. Petersburg and Pinellas County as closed markets for MBEs. “We’ve bid on projects that HORUS would’ve been perfect for, given our track record. But we weren’t chosen.”

That’s beginning to change, he says. HORUS is also working with the Pinellas County Office of Small Business & Supplier Diversity (OSBSD) to explore opportunities through its SBE Program.

The brothers say they couldn’t be prouder to be selected for the Sankofa project. “This is personal for us,” says James. “The Graham family has lived in this area for 50+ years, with fond memories of going to Geech’s for barbecue and Green’s Bakery for sandwiches and baked goods. We’ve seen the Deuces past and present, and we are honored for the chance to be a big part of its future.”

Both men graduated from St. Petersburg High School. James was the first black junior classman ever inducted into the National Honor Society at the school.

HORUS represents three generations of contractors. Their father – James Graham Sr. – was a contractor and three of James’ children also work for the family firm. His two daughters – Lena and Candice – manage business development and SBE/MBE contracting programs for HORUS, while James, III, is a Superintendent, currently overseeing the Moffitt Cancer Center expansion. 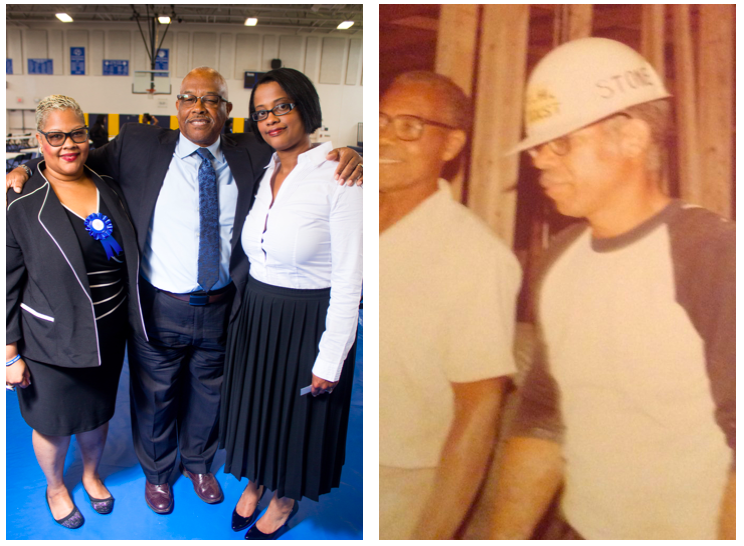 “HORUS and the Graham family represent all that we hope to achieve through the Sankofa Vision,” says Pastor Louis Murphy, of Mt. Zion Progressive Missionary Baptist Church, one of five non-profit partners of the Sankofa Vision Group and a member of the 2020 Plan/One Community Plan board that spearheaded the Sankofa Vision. “Not only is HORUS a shining example of success in multi-generational wealth building. They proactively reach back to help smaller firms build their businesses too.”

The company sponsors the HORUS Academy, which mentors and cultivates sub-contracts for smaller firms. So far Academy participants have grown from an average $250,000 in revenues before starting the program to $1.7 million by the end of two years and $8.6 million by the end of six years with the Academy.  HORUS is partnering with Pinellas County’s OSBSD to launch Construction Management Academy in Q4 of 2021, to prepare more minority construction firms to compete on larger jobs.

Intentional About Reaching Out to MBEs

The selection of HORUS for the Sankofa project is a prime example of the outreach and advocacy sometimes needed to give minority-owned contractors an opportunity. The Sankofa Group and City staff were intentional about getting the RFP into the hands of the largest black-owned firms in the region.

“This is a defining project, not just for the Deuces, but for our whole city,” said St. Pete Mayor Rick Kriseman. “I want to thank the HORUS team for coming on board to execute the Sankofa vision for the Deuces, and look forward to putting a shovel in the ground to get this project started.”

Deputy Mayor Dr. Kanika Tomalin added, “This is a critical project in St. Petersburg, and we have high expectations, not just for what the site will be once we cut the last ribbon, but for how it will catalyze opportunity for our community. We have full confidence in the Graham family and express our gratitude to the HORUS team for taking on this important endeavor.”