Posted on November 4, 2018 by Gypsy Gallardo in News, The Black Vote 0 Comments 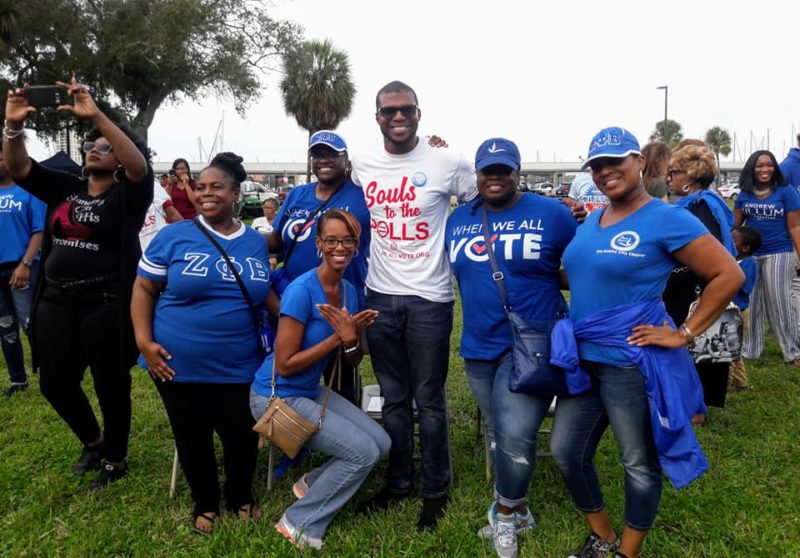 The women of Zeta Phi Beta Sorority with Corey Givens, Jr. at Souls to the Polls St. Pete 2018

The rally helped produce the biggest single day vote count so far from the City’s majority-black precincts; 1,487 new ballots came in between 5 pm Saturday through the 7 pm poll closing on Sunday, bringing the community total to 13,385 votes cast.

The event was spearheaded by the Pinellas County Urban League and co-sponsored by eight churches, along with six chapters of the “Divine 9” black fraternities and sororities, the Panhellenic Council and a dozen civic leaders (see full list at end of this post).

Roughly 200 likely voters and community leaders came out to support the gathering, while churches promoted voting before and after services this morning.

“Today was about ‘unity’ and keeping the banner lifted that this must be an historic vote,” says Watson Haynes, CEO of the Pinellas County Urban League. “We have urgent issues on the ballot, including the moral imperative to pass Amendment 4.”

As a new feature to the perennial occasion, lead organizer Nikki Gaskin-Capehart asked fraternities and sororities to treat attendees to a mini-step stroll (pictured left, with ladies of Alpha Kappa Alpha in center pic, and the women of National Council of Negro Women at right).

Co-Sponsors of Souls to the Polls 2018 in St. Pete