Posted on November 3, 2018 by Gypsy Gallardo in News, The Black Vote 0 Comments 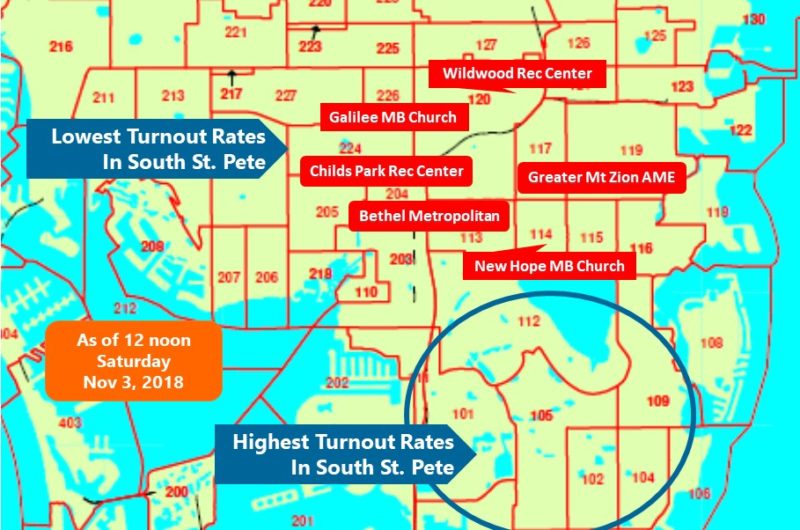 Seven precincts at polling places labeled above lag 10 points or more in early votes, compared to the rest of Pinellas County

Though St. Pete’s majority-black precincts have already beat their all-time record in early voting in a midterm, Democratic organizers say “It’s not yet enough to seal the win” for Andrew Gillum and other Democrats on the November 6th ballot.

With just three days left in the races, community organizers are calling for a “full court press” to push Democratic candidates over the top in tight races.

Much of this weekend’s focus will be in South St. Petersburg, where – despite an historic level of early voting – turnout still lags the rest of Pinellas County (30% in majority-black precincts to 38% countywide).

Seven Southside precincts currently trail the countywide early turnout rate by more than 10 percentage points (shown on the map above).

“If you live in Childs Park, Campbell Park, and the Wildwood Rec Center areas, or if you know someone who lives there, we need you,” says Bro John Muhammad, one of several field organizers heading teams to knock on doors. “Even if you already voted, call and visit your friends and family members to be sure they do too.”

Rene Flowers says she’s hearing from minority voters that they just don’t trust vote-by-mail after observing what happened in Maryland and Georgia. Which is why she’s telling everyone, “Let’s make it our mission to drive through the streets with a bullhorn if we have to on Saturday, Sunday and Tuesday. Don’t stop canvassing, calling and texting to get people to the polls!”

So far only one majority-black precinct is outperforming the countywide average (precinct 112, where 41% of voters have already cast ballots). Several others come within striking distance, with turnout in the mid 30% range ((precincts 101, 104, 105 and 109).

Southside Democratic Club President Linda Lucas says help is needed in precinct 102 as well as communitywide. Turnout there stood at 34% by noon Saturday.

“We need voters everywhere – young and old – to turn out,” says Pastor Louis Murphy, Sr. of Mt Zion Progressive Missionary Baptist Church, which hosted a visit by Andrew Gillum in late October. “If we vote, we win, and we all have family members and friends who need that extra touch or a ride to the polls to be sure that every vote counts in this victory.”

6 Ways To Help this Weekend through Tuesday: