Posted on March 14, 2020 by Gypsy Gallardo in News, The Black Vote 0 Comments 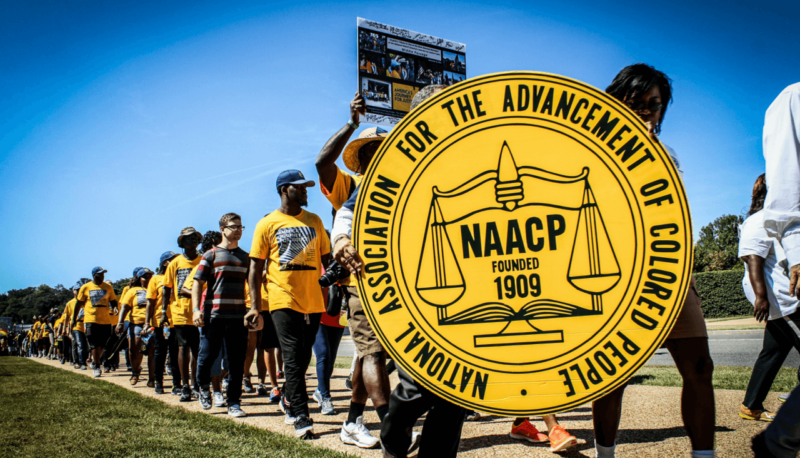 NAACP activists march (Facebook page of Clearwater/Upper Pinellas NAACP, which will be active in voter turnout efforts in Clearwater in the months ahead)

The Power Broker Media Group has chronicled the black vote in St. Petersburg, Florida, for 16 years. This marks our first look at the size and strength of the African American electorate in Clearwater (home to Pinellas County’s second largest black population). Based on a review of the past four presidential general elections, Clearwater’s black vote is gaining strength and consistently turns out in presidential cycles. Though St. Pete’s black voting base is five times larger and typically produces slightly higher turnout rates, Clearwater shows a higher black registration rate and stronger growth in net new African American registrations over the past three presidential cycles.

Here are six things we should know about our north Pinellas peers as we head into the thick of the 2020 contest.

Clearwater has nearly 7,000 registered black voters, which is roughly 10% of the city’s population of registered voter. Americans are currently the largest racial/ethnic minority voting bloc in the city.

This is fast-changing though, as Latinos and other people of color grow their numbers in the city. Among the four racial/ethnic groups tracked by the Pinellas County Supervisor of Elections, Hispanics had the biggest bounce in voter registrations in Clearwater, both in number of new registrations and percentage growth (166%).

Overall, people of color are a growing share of Clearwater’s voter base. Racial and ethnic minorities were 16% of Clearwater’s registered voters in 2004. Their share grew to 23% in 2016. 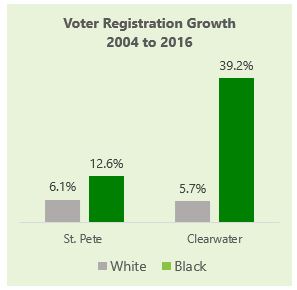 St. Pete had five times more registered African Americans in the 2016 election (34,621), but Clearwater’s black electorate is faster growing, relative to its size.

Also notice in the graph above that Clearwater’s black voter growth rate is seven times higher than white voter growth in the City for the years studied by Power Broker.

3. Turnout is strong in presidential elections 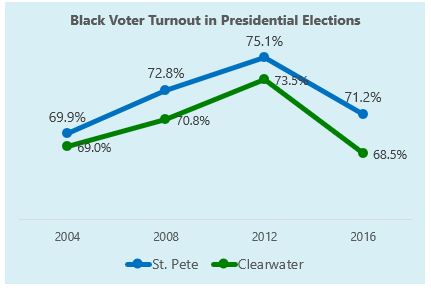 4. The white-black gap is bigger in Clearwater

5. Black turnout dropped by more in Clearwater in 2016

Clearwater has consistently higher registration rates for African Americans, compared to St. Pete (i.e., the percentage of adults who are registered). The registration rate declined for both cities over the last two election cycles (possibly due to Governor Rick Scott’s reversal of ex-felon voting rights restoration set in place by his predecessor, former Governor Charlie Crist).

Notice in this next graph that St. Petersburg has lost steam considerably in its registration rate since 2008, when 90% of adults 18+ were registered. In 2016, the figure stood at only 78%. 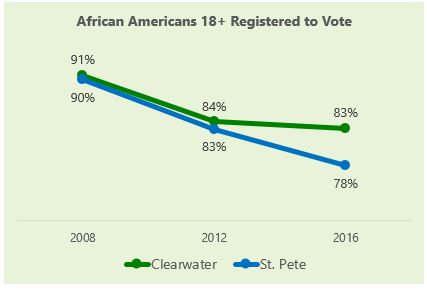 For information on how you can help with voter education, registration and activation, reach the Clearwater/Upper Pinellas Branch of the NAACP at (727) 307-4865 or NAACP5096@gmail.com.