Posted on November 2, 2018 by Gypsy Gallardo in News, The Black Vote, Uncategorized 0 Comments

– As of 12 noon on Friday, November 2nd, with five days still left on the clock, St. Petersburg’s majority-black precincts have already surpassed their total early/absentee vote in the last midterm election. Voters in the city’s majority-black precincts have turned in 10,691 ballots as of this writing, a smidge more than their total 10,687 early/absentee votes in the 2014 midterm general election.

The news is the latest indication that black voters are pedal-to-the-metal to see Andrew Gillum elected as Florida’s next Governor.

The electorate is charged by other factors too. Topping the list is a passion to pass Amendment 4 (restoring ex-offenders voting rights), and the hope of electing Sean Shaw as Attorney General.

“This is our own Obama moment,” says Carla Bristol, a community leader working full-time in the push to maximize turnout. “We should vote now like we did in the 2012 presidential election. Our economic lives depend on it!”

Community leaders are aiming for at least 20,000 black votes by the close of the November 6th election, which would shatter the high-water mark for a midterm.

The last record set was in November 2014, when 17,094 African Americans in St. Petersburg cast ballots, increasing their turnout rate to 51% that cycle (see graph below).

The push continues this weekend with door-to-door canvassing and phone banking throughout the community. Special projects on tap: on Saturday morning, a team organized by Jabaar Edmonds and friends are calling on volunteers to help canvas the Jordan Park housing development; then on Sunday, the Pinellas County Urban League Young Professionals group is spearheading a Souls to the Polls festival and caravan on Sunday, with food and entertainment for the family at Demens Landing, 12 noon to 5 pm.  All of the “Divine 9” black fraternities and sororities are backing the effort, along with several churches. 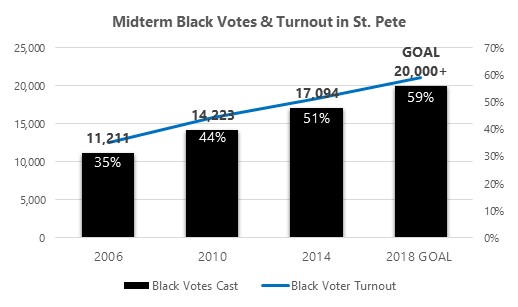