Posted on October 22, 2019 by Gypsy Gallardo in News, The Black Vote 0 Comments

With just two weeks to go until the November 5th election, a surprising number of St. Petersburg’s black voters are still undecided, according to poll results released Monday by FloridaPolitics.com.

Black voter preferences are fairly clear in two of the races: in District 5, Deborah Figgs-Sanders came out 18 points ahead of Trenia Cox among African American voters (43% v 25%), while in District 7, Lisa Wheeler-Bowman had a 22-point edge over Eritha Akile Cainion (46% v 24%) with black voters.

Just under one-third of African Americans polled are undecided in those two races, which span large portions of South St. Petersburg (and are home to the two largest groups of black voters in the City, by district).

But black voters were far less decided in the other two Council races.

In District 3, the black vote is effectively tied between Ed Montanari and Orlando Acosta (27.8% v 27.1%), with 45% of black voters still unsure. 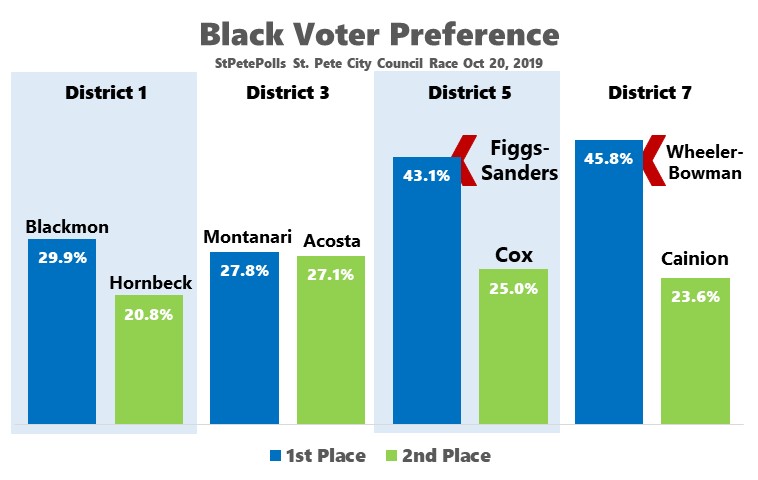 This may amount to racial opaqueness (i.e., the relative inability to “see” a cross-race candidate and their merits), at least in part.

But many agree with Dr. Mendee Ligon’s take on the subject. “The disgust, apathy, economic challenges, and the surge in racism is very discouraging. Hope is Not alive…. Hope is a daily struggle…,” Ligon noted in a Facebook post on Monday.

In similar vein, political activist Lucinda Johnson wonders if people are truly undecided or “just exhausted by the political climate in this country and just want to be left alone without answering the question.” She notices fewer people answering their door during her canvassing activities.

Whatever the reasons, the candidates have 14 days remaining to make their case.