Breaking Down the Polls: Black Voter Preferences in the 2020 Presidential Primary (Feb 17, 2020)

Posted on February 17, 2020 by Gypsy Gallardo in News, The Black Vote 0 Comments

Black voters are prepared to support “anyone but Trump,” but show no real zeal for any of the Democratic candidates.

So far, media coverage of the early February polls by Quinnipiac and Economist/YouGov has highlighted only two facets of African Americans’ preferences in the 2020 presidential primaries: 1. Michael Bloomberg surged to second place among black voters nationwide, and 2. Joe Biden is fading fast in black voters’ affections.

Both may be true, but the most recent polls (February 9-11th) served up a much richer trove of findings about the collective leanings of America’s 30 million eligible or registered black voters.

For one, black voters are on track for higher turnout in the 2020 primaries than any other race group reported by Economist/YouGov. In its most current release, 84% of African Americans plan to vote in the 2020 primary, versus 81% of white voters, 80% of Hispanics and 60% of Other voters. This means that black voters could cast more Democratic primary votes that all other racial/ethnic minorities combined.

Even more glaring, an overwhelming majority of African Americans will vote for anyone but Donald Trump. More than any race/gender/age group reported by Quinnipiac and YouGov, black voters want Trump out!

Though a much higher share of African Americans say they would prefer a candidate who shares their views “if all else were equal”  (62% of black voters versus only 37% of white voters), black voters clearly recognize that “all else is not equal.”

Quinnipiac shows that an average 82% of African Americans would vote for any of the six leading Democrats over Trump, compared to 44% of white voters who would. And in last week’s Economist/YouGov release, 74% of black voters said they would vote for the Democratic candidate (no matter who it is) against Trump.

But don’t mistake black voters’ distaste for the 45th president as passion for the Democratic contenders. So far, there are no signs of actual zeal for any single candidate on the part of African Americans.

And take note of how quickly Joe Biden could be thrown under the electoral bus among black voters. Though he ranks number one in polls of black voters (and has held that position for months)…

Take-Aways about the Leading Democratic Contenders

Among top ranked Democrats, Sanders is best known among African Americans; 95% of black voters know of the third-term Senator from Vermont, which – surprisingly – slightly edged out the 93% who knew of former two-term Vice President Joe Biden (93%). Warren held a not-too-distant third (83%).

Buttigieg was the least well known among black Democrats; 42% of them hadn’t heard of Buttigieg in the February 10th Q-Poll. Despite his first-place win in Iowa, Buttigieg had less name recognition among African Americans than any of the top six contenders.

Possibly a testament to his marketing prowess (or the deluge of recent negative media), Bloomberg was known to 70% of African Americans, despite his late start in the race. 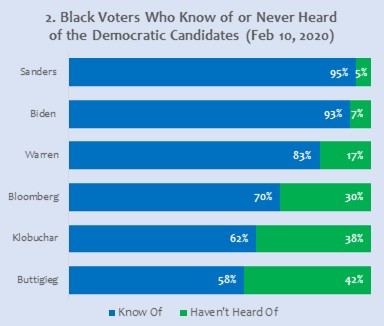 Buttigieg has the biggest race gap in favorability ratings (71% of white Democratic voters held a favorable view of him, a 29-point gap with the 42% of African Americans who view him favorably). Three candidates are viewed more favorably among black versus white voters – Sanders, Biden and Bloomberg. Sanders had the highest black edge in favorability (80% of blacks polled held a favorable view of Sanders, a 9-point gap over the 71% of whites who did).

Among black Democrats*, Buttigieg was the least liked candidate in the latest Q-Poll (13% had an unfavorable view of him). That isn’t so bad, considering that Sanders and Biden are nipping his heels in this category (12% of black voters see Sanders unfavorably and 11% say the same of Biden). But Buttigieg has another problem in likeability metrics. The most recent Economist/YouGov poll found that 27% of black voters would be disappointed if Buttigieg won the Democratic nomination (a bigger share of disappointed black voters than any other candidate drew). 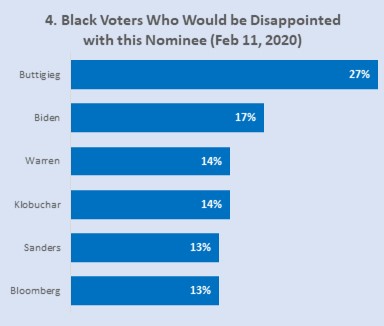 Who Black Voters Favor in the Democratic Primary

Black voters have notably different preferences than whites when asked who they would vote for if the Democratic primary were held today. In both the Quinnipiac and Economist/YouGov polls conducted Feb 9-11th, Biden is the top pick for black voters, while Sanders is the top pick for whites.

That doesn’t imply that black voters are circling their wagons any more tightly than white voters; the overwhelming majority of African Americans say they will support “anyone but Trump.” 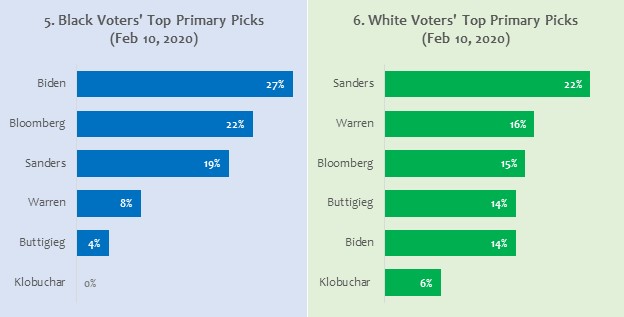 Hands down, Bloomberg saw the biggest bump among black voters in the two+ months between Quinnipiac polls in late November and early February 2020 (a meteoric rise from 0% of the black vote to 22% in the latest Q-Poll ). Sanders had the second biggest bump (up a net 8 points to 19%).

Biden and Warren saw the biggest drops, both falling 16 points to their current standing – Biden at 27% of the black vote and Warren at 8%.

Over the same timeframe, Buttigieg had a net zero gain and Klobuchar fell one point.

Gypsy Gallardo is Publisher of the Power Broker magazine, TheBurgVotes.com and the forthcoming AmericanBeach.News. She is also CEO of Urban Market Analytics. Her life’s work is dedicated to the advancement of black Americans. During the 2020 Presidential Election cycle, Gypsy will contribute coverage and analysis of issues of most importance to people of color.