For the 1st Time, People of Color are a Majority of Florida Democrats

Posted on March 19, 2020 by Gypsy Gallardo in News, The Black Vote 0 Comments

For the first time in presidential election history, a majority of Florida’s registered Democrats are people of color. Black, brown and other non-white groups now claim 53% of the party’s registrations, according to the Florida Supervisor of Elections “book closing report” for the March 17th presidential preference primary.

Unlike the state’s Republicans, who remain over 80% white, Florida’s Democratic Party has seen its demographic composition shift rapidly over the past 20 years. Back at the turn of the century, white registrants made up 72% of Democrats. Today, they are 47% of registered Democrats, and their share may fall farther still as voter registration efforts kick into high gear in preparation for the November general election. 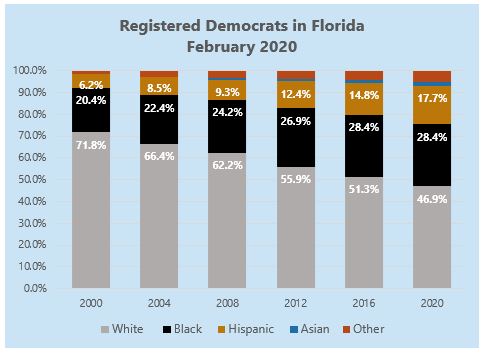 The changes are driven by several trends. In addition to rapid population growth for racial and ethnic “minorities,” more white Floridians are choosing to align with the Republican party.

The move has dramatically shifted the balance of the white electorate to the Republican party. Whites Republicans currently outnumber white Democrats 1.6-to-1. This is a sharp contract to all other race & ethnic groups tracked by the Supervisor of Elections, all of which have Democratic majorities.

Voter registration campaigns are also contributing to the rapid colorization of the Democratic party. People of color account for 91% of net new voter registrations since the 2016 primary. 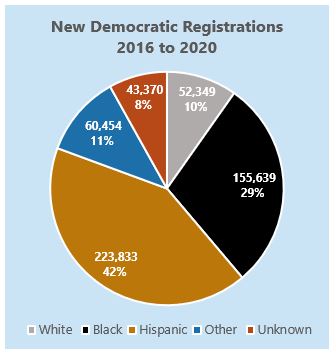 African Americans remain the largest non-white group of Democratic voters by far (with more voters on the rolls than all other non-white race & ethnic groups combined). Hispanics have seen the biggest surge in net new registrations, adding 223,833 to Democratic totals in the past four years alone.

For the Florida Democratic Party, this may mean a significant shift in strategy in the months ahead.

Trevor Mallory, president of the Pinellas County Democratic Black Caucus, says “African American representation will be key, both on the ticket and at the grassroots.” Pinellas County ranks in Florida’s 10 counties for the size of its black population and Mallory is not alone in voicing his preference for a black vice presidential candidate.

Rev. Louis Murphy, pastor of Mt. Zion Progressive Missionary Baptist Church in St. Petersburg, says “Former Vice President Joe Biden won 74% of Florida’s black vote this week. We’re looking for him to bring his heart and soul to truly engaging our community in the months ahead and even more so after the election.”