Over the past five years of available Census data, Hillsborough County surpassed a quarter of a million black or African American residents (256,400) and ranked 4th among Florida’s 67 counties for largest net black population growth.

From 2013 to 2018, Hillsborough saw net black population growth of 28,000. Only three Florida counties had more of an influx: Broward, Orange, and Palm Beach counties.

Three-quarters of Hillsborough’s five-year black population growth can be credited to inbound migration of new residents. Over the timeframe reviewed by Power Broker Media, net births (births minus deaths) equals around 7,100. 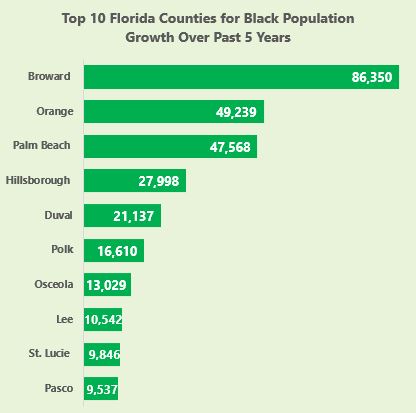 That means that as many as 21,000 black migrants relocated to Hillsborough over the past five years measured by the Census. An estimated 15% of that stems from foreign-born black individuals and families from Africa, the Caribbean, Latin America and other.

It makes sense that Hillsborough would be a magnet for migration. The county is one of the largest employment hubs for black college-educated professionals in the southeastern U.S., and one of Florida’s biggest hubs for black-owned businesses.

The recent growth spurt makes Hillsborough one of only six counties in Florida with over 250,000 black residents. 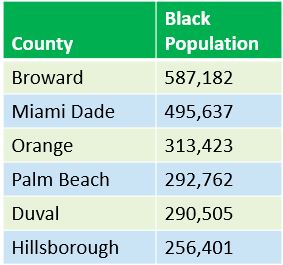