Mhariel Summers: Looking for answers and finding them in politics

Mhariel Summers wasn’t looking to enter politics when she decided to go back to college in 2016 — she was looking for answers.

Summers, 30, was disheartened at the wave of highly publicized police shootings that began to dominate the national conversation in 2015. That piqued her interest as to how things like that could happen in our country – on camera – and yet people were not being charged with a crime.

A lifetime resident of St. Pete and graduate of Lakewood High, Summers was 25 when it dawned on her that going back to school to study political science could enlighten her on how our criminal justice system was continuously failing people.

After starting at St. Petersburg College, Summers transferred to the University of South Florida St. Petersburg and graduated last year with a degree in political science and a minor in entrepreneurship. However, her education continued far from the classroom.

“While I was working on my degree, I had the mindset that I was not going to wait to get meaningful experience until I graduate,” said Summers. 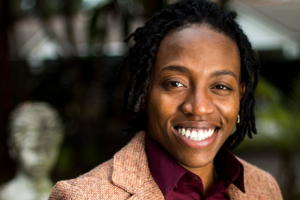 She began interning at the Carter G. Woodson African American Museum, eventually working her way to manager. She then had the opportunity to intern for State Senator Darryl Rouson, which enabled her to visit Tallahassee and learn about the state legislature up close. Finally, after graduating, Summers became the Black Engagement Coordinator for Congressman Charlie Crist on his bid for reelection this past fall.

“We were able to get him successfully reelected,” noted Summers.

Most recently, before setting her sights on city council, Summers served as District Secretary for Representative Michele Rayner.

Summers said that in addition to her education, she has gained a lot of practical experience in the political arena and found that making a difference is her passion.

“I was brought into this whole realm of things by just easily understanding the unfairness that exists in our society,” said Summers. “That’s what I’m passionate about and kind of what my campaign follows.”

Summers, who entered the city council race just a week before the qualifying period ended, said that running for a city office was not in her original plans.

“I didn’t get my degree in this field to run; I got my degree just to have the knowledge,” she asserted.

Summers said that her district – District 6 – highlights the disparities that exist in St. Pete. She noted that economically and demographically, it is one of the most diverse districts in the city, and she believes it has become “the heart and soul of St. Pete.” She points out the parts of her district that exist downtown have taken well to all the recent development, “the economy is booming,” while the predominantly Black areas of the district lag far behind.

“They have not seen any changes in the quality of life for the residents who live there,” said Summers. “That was the catalyst for me to get into this race.”

Summers said the need is just too great for too many people in that district for our incumbent to just walk back into office unchallenged.

That incumbent is Gina Driscoll. Summers pointed out that while this would be her first term, Driscoll is currently in her first term and was not prepared to handle the “magnitude and complexities” of the district. Summers believes she has more experience with some of the challenges residents in District 6 face and more experience with stakeholders – especially those in the Black community of District 6.

“The councilmember has had four years of a head start, so you can’t take that away,” stated Summers. “But I think there’s a term difference between experienced and qualified, and I see myself as more qualified to accomplish more in these next four years.”

Summers said that her main platform is to keep the city growing but with visible equity. She said visible equity is most important because growth measures will not be sustainable long-term without it.

Summers called that a stain on the city that limits the potential to be the state’s premier economy.

“I’m all about growth — I’m a capitalist at heart,” said Summers. “But I think we have to be intentional about inclusion with the way that we’re growing.”

Summers supports the Sugar Hill development plan for Tropicana Field, both with and without a stadium. She thinks they have the best understanding of what the site means to the Black community and believes it is important for the city council to prepare the community to “reap the benefits from the opportunity.”

She is also against the recent 25-year lease proposal for the Municipal Marina and favors keeping it public. “We have to be really careful about how much of our public infrastructure and our public facilities we’re just willingly turning over for a profit,” she said.

When it comes to affordable housing, Summers wants to address what constitutes “affordable.” She said that a $55,000 annual salary might be considered average to some, but that is a high income and well above average in many communities.

She wants to focus on market equilibrium, making sure wages keep up with the cost of living. She also supports rezoning, tiny homes, and multi-family homes to address homelessness and a housing shortage.

Summers said that it is vital for people to know that “their political power is just as important as their economic power.”

“If there’s one thing people should know, it’s that their voice matters, and their vote counts.”