Settling the Question: How Big a Factor were Black Voters in Mayor Kriseman’s Election? 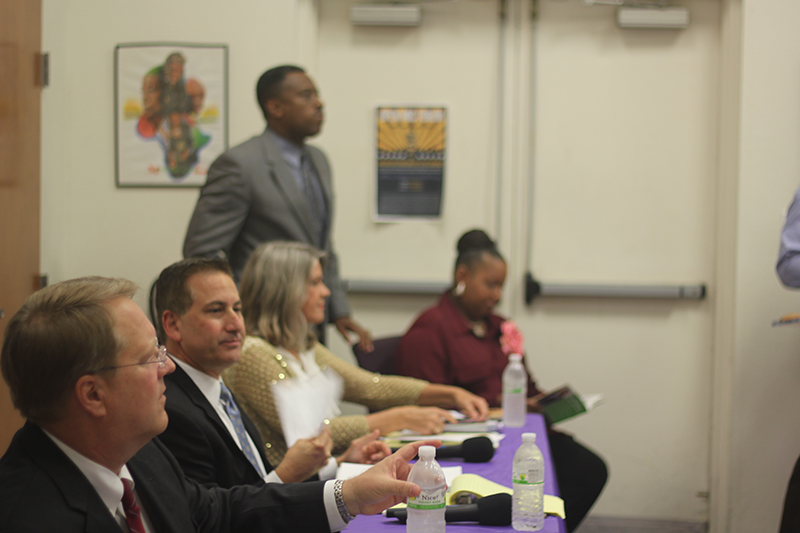 Then candidates Bill Foster, Rick Kriseman and Kathleen Ford, answer community leaders’ questions at an Aug 14th 2013 forum hosted by the 2020 Plan team; it was one of several turning points that elevated Kriseman among black voters from last place in an Aug 4th poll to successfully come out of the Aug 27th primary.

Shortly after mayoral hopeful Rick Kriseman won the November 2013 election, unseating one-term St. Petersburg Mayor Bill Foster, Kriseman’s former campaign manager Cesar Fernandez and the Tampa Bay Times issued separate analyses concluding that the black vote was not as big a factor as some thought it would be.

Fernandez tweeted, soon after election day, that Kriseman “did not need the African American vote to win, could have lost those precincts 45% to 55% and still have come out on top,” referring to the Southside’s majority-black precincts.

Four days post-election, the Times reported: “Many believed that this race, like others before it, would be decided by black voters…The Times review, however, showed that even when ignoring the 19 precincts populated by a majority of black voters, Kriseman still would have won, albeit by just more than 1,000 votes. That said, Kriseman’s wide margin of victory was clearly the result of his support from black neighborhoods — he won all 19 primarily black precincts.”

But both analyses made a critical error in not counting African American voters who live outside of precincts where a majority of voters were black in the 2013 election. This excluded well over one-quarter (28%) of black voters who cast ballots in that race.

If Fernandez and the Times analysts had counted all of the City’s black voters, using Fernandez’s same hypothetical scenario (with Foster winning a 55% majority of the total black vote), Kriseman would’ve lost the election by 500+ votes (close enough to potentially cause a recount).

And since the City’s black electorate typically votes in a two-thirds-or-more bloc in Mayoral elections (such as it did to elect Mayors David Fischer, Rick Baker, Rick Kriseman, and even Bill Foster, in his first run in 2009), a more realistic hypothetical would be:

“What if Foster had won the black vote share that is typical for the community’s favored Mayoral candidate?” In that scenario, if African Americans had backed Foster for a second time, giving him 70% of their vote, Foster would’ve won the 2013 election by over 1,900 votes.

Stats on the Strength of the Black Vote for Kriseman

Not since the 2001 general election that seated Mayor Rick Baker for his first term, and never in the City’s history had the black vote count been as high in a Mayoral election as it was in November 2013.

The 9,452 American Americans who cast ballots in 2013 was the highest number in a Mayoral election in at least 20 years, besting even the 8,900 black voters in the 2001 race between Rick Baker vs Kathleen Ford race, and the 8,850 who voted in the 1997 David Fischer vs Bill Klein race.

This article was originally published in October 2014 by the Power Broker Media Group, in its Southside Voter Guide for the mid-term election that year.

2 thoughts on “Settling the Question: How Big a Factor were Black Voters in Mayor Kriseman’s Election?”