Posted on March 2, 2019 by Gypsy Gallardo in News 0 Comments 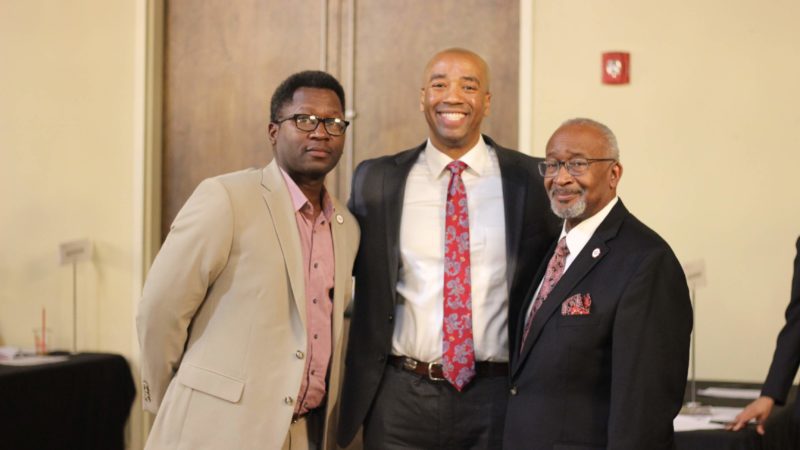 Sowell is the Chief Executive Officer of Enterprise Florida, the organization he leads in “preparing Florida for the tomorrows that are coming…by expanding and diversifying” the state’s economy.

At the national level, Whitney young, then CEO of the National Urban League, worked on a similar plane, Sowell recalled.

“We remember Whitney Young because he made an impact” through his devotion to the League’s work on economic and social progress, his part in the Civil Rights struggle, and the mark he left on the improved quality of life for African-Americans, Sowell said.

“He spoke truth to power and could walk into the Oval Office knowing thousands of Brothers and Sisters had his back,” Sowell remembered.

Sowell said he was “blessed” by the legacy of Young and men and women like Rosa Parks, Martin L. King Jr. and Coretta King as “waymakers” on whose shoulders he stands and who turned “the impossible for me into the possible.”

Sowell, a student body President at the University of Florida, a Marine in Afghanistan, also earned Masters and Law degrees before serving as Port of Tampa Bay’s Chief of Staff. The port, Florida’s largest port of acreage (over 5,000 acres), handles over 37 million tons of cargo per year, has an annual economic impact of $17.2 billion dollars, and supports 85,000 direct and indirect jobs.

Preparation is the key, he emphasized in subsequent remarks to an engaged audience after a supper-like lunch and dessert.

Because of the work and the sacrifices of those leaders he called out, “I am a better man. They gave me permission to be me, and the opportunity to try.”

“I want to thank the leadership here at PCUL for making a difference,” Sowell says. “You all see this community – not as it is – but as it can be.”

Indeed, he went on, “The Bible tells us that we’ll give out if we don’t look ahead. That is to say, ‘where there is no vision, the people perish’”

So, he added, “I’m thankful that this organization allows people of vision from across Pinellas County (now serving people in 7 West Florida counties) to mobilize and come together to put some legs and feet on the vision.”

What good is a vision if it gathers dust on a shelf, he asked. It must be picked up and distributed like seeds from the bag of the sower, he proclaimed.

In praising PCUL and its 10 different programs and services provided to adults and youth, Sowell offered that that there is another man, well prepared, important in this equation: “Reverend Watson Haynes is our own Whitney Young,” a declaration that garnered much applause.

After all, he noted, “He has worked tirelessly to make sure that hundreds could have a bite at the apple, a seat at the table, and a chance at the dream.”

Sowell observed that once Tampa Bay residents look inside PCUL, into their neighborhoods, in their churches on Sunday, they’ll find people who made the dream possible, who bore the bruises because they believed in something better.

“They are the history makers, and the risk takers,” Sowell says, “They don’t get a holiday in their name, or a school named for them. Or even a street. But they stand as tall as giants. They loom large over the lives we live today.”

Recall, if you will, Sowell challenged, that grandmothers who stayed on you to get to school and stay there; that teacher who challenged you to stop dreaming small dreams; or that pastor who reminded you to “go in the name of the Lord.”

“People like Rev. Haynes may walk around like it’s no big thing, but what they do is sight unseen. They remind us that opportunity is coming. We need to get prepared.”

Sowell reminded his luncheon guests, Black, White, Latina, Christian, Jew and Muslim, attending this Black History Month event, that “Our Black history teaches us that progress only comes when we are selfless and relentless.

“Will you pledge this afternoon to be selfless in serving others and relentless in creating change,” he asked. “Are you willing to pay the price, invest the time, and keep the faith?

This year, the PCUL Outstanding Achievement Award was presented to Head Football Coach Cory Moore of Lakewood High School in St. Petersburg. He is responsible for successfully coaching many local student-athletes in their academic, personal, college and professional pursuits, including students who have gone on to earning a living playing in the National Football League.

“This is not about just a football coach, this is about a young man who has made a difference in the lives of many young people who have crossed his path,” said Rev. Haynes as he presented Coach Moore with the Urban League’s most coveted award.

“We may think at times that no one is really paying attention, but someone is always there to see what we are doing,” said Moore.

“I’m very humbled to even be in the same sentence with the Urban League and things that Whitney Young has done.”

For the next 20 minutes, guests waved their arms to waiting staff who came and retrieved their checks. A solid, rewarding event for the Pinellas County Urban League and the thousands of residents who take advantage of their many services designed to help them make economic and social progress.