‘Not My Son,’ A Rallying Cry Following Deaths Of Young Black Men To Gunfire In St. Petersburg

This article originally appeared on WUSF

During a span of just two months in 2015, seven young black men were shot to death in St. Petersburg.

The murders were not connected.

But the random violence did serve as a clarion call for African-Americans and the community at large.

In Bartlett Park, just south of downtown, a few friends from St. Petersburg College end their work day by meeting up with several police officers. They’re all walking house to house, knocking on doors and telling neighbors about the city’s ‘Not My Son’ campaign.

Armed with a collection of yard signs and postcards, the canvassing effort is part of a summer long safety campaign directed at young black men and their families.

Nikki Hall grew up in St. Pete, and so did her colleagues, that’s why they’re all here tonight asking families to take a safety pledge.

“There’s a parent pledge on the front and a youth one on the back,” Hall told one parent. “Keep your eyes and ears out so we can keep everybody safe.”

‘Not My Son’ is part of a nationwide effort called ‘My Brother’s Keeper,’ launched by former President Obama in 2014.

Kenny Irby, St. Pete’s Community Intervention Director, was also part of the recent canvassing event. He said the focus is keeping young African-American men safe and out of trouble. The program concentrates on three key areas.

“The need for educational assistance, job readiness, and also the great need for mentoring and enrichment,” he said.

Last year, the city committed one million dollars to ‘Not My Son’ and a program called ‘Cohorts of Champions.’ Today, almost 100 young men aged 12 to 24 are enrolled in the year-long program.

There is less gun violence following the seven murders of two years ago, but young men are still dying. Two were shot to death earlier this year. Holloway, who joined the canvas with the group from St. Petersburg College, believes lasting change won’t happen unless the community changes too.

And that includes his own department.

“We have to get out of our cars and reintroduce ourselves to the community,” he said. “Let the community know that we’re not there to occupy and that we all want the same thing, to get that criminal element out of our community. But the only way we can do that is by what we’re doing tonight, and that’s working together.”

“We’re here as watchmen and as gatekeepers,” she said. “We want our children as well as the families to know that we have not forgotten about you.” 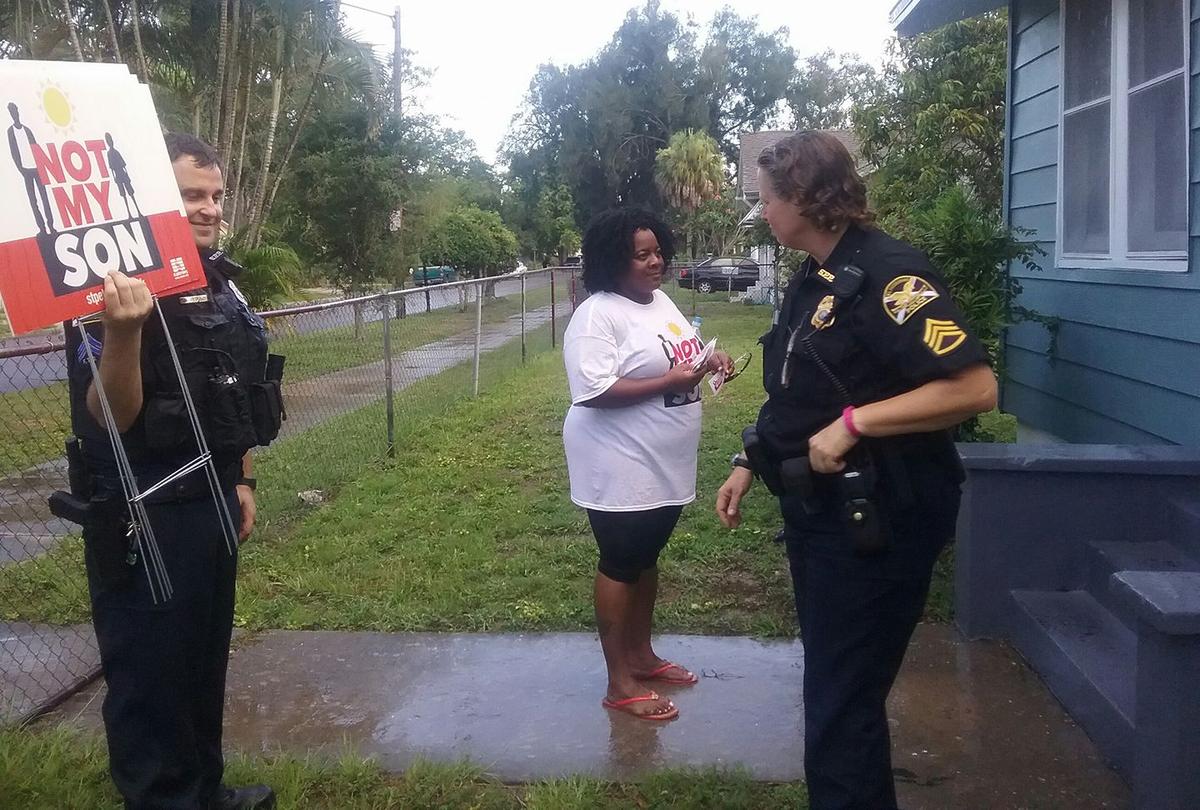 So, like the campaign’s pledge cards suggest, parents should know who their kid’s friends are and should monitor their social media.

But Kenny Irby, the city’s Community Intervention Specialist, and a pastor himself, said what would really make a difference is having more men step up.

“Because the truth of the matter is the harvest is plenteous and the labor is a few,” he said. “I have far more boys seeking and needing service and mentors than I have men who are willing to invest the time and make that kind of commitment.”

As the group from St. Petersburg College continued to knock on doors, one was opened by a young man in his early 20s, who just happened to be home on a Friday night.

“Have you ever thought about college?” asked canvasser Roslyn Tarver. “We were work in midtown at St. Petersburg College. Come see us. You and all your friends,” she added, with a laugh. “Bring them all!”

When the sun was almost set, the ‘Not My Son’ canvassers called it a night. But Irby said the memory of seven murdered young men will bring them back again next week.

“If we can collectively get the community to start to say, ‘we’re not going to see the blood of another son of St. Petersburg running in the street,’ then we’ll know we made a difference.”

And for this community of walkers at least, that blood doesn’t have to be their own to say, “Not My Son.”