A red-hot brand. A high traffic location. Hometown pride. And the full backing of his family. These are the ingredients poised to make Urban Ink Tattoo Company a classic St. Petersburg success story.

This Saturday, the 12-year old enterprise celebrated its expansion to a new studio on US 19 South. The move not only doubled the firm’s space, but put owner Chris Roberts on the map, as one of the rarest of commodities – a black entrepreneur and owner in the fast-growing “body art” community.

It was dream come true for Roberts, better known as “Brain Storm (The Genius).” He and his team have risen to regional fame for their skills with the “skin pen.”

But they are among a tiny group of black tattoo artists surviving in the industry, and Roberts is one of the miniscule number of African Americans who own and operate the place where they practice their art.

Roberts spoke of the challenges to the crowd of four dozen who came out to Saturday’s ribbon-cutting ceremony. “The journey in the tattoo world for a black tattoo artist is hard, so I wanted to create a place that would be home for any black tattoo artists and anybody who supports the culture. If you know anybody who wants to be an artist, they can come here and be accepted,” said Roberts.

The young businessman was almost moved to tears as he thanked his family and partners for supporting the vision to be a first-of-its-kind regional creative hub for fellow artists. The new store – located at 2108 34th Street South in St. Petersburg – is well on its way to that status.

Tatt artists Anthony Coleman and Rico Anderson (a.k.a. ZigZag) have helped Roberts grow the business, which relocated from a smaller space at 3018 Central Avenue where the trio operated for nearly 12 years as they built the Urban Ink brand.

“I want to thank all the people who helped me make this happen,” said Roberts, acknowledging his wife, parents and extended family.

His mother – LaVerne Roberts – opened the ceremony with praise for Roberts’ perseverance. “My son has had a vision in place for a long while now. It’s been a long road but a road that’s worth it. It’s awesome to see this vision come to fruition. I am thankful to God and thankful to the community that supports him.” 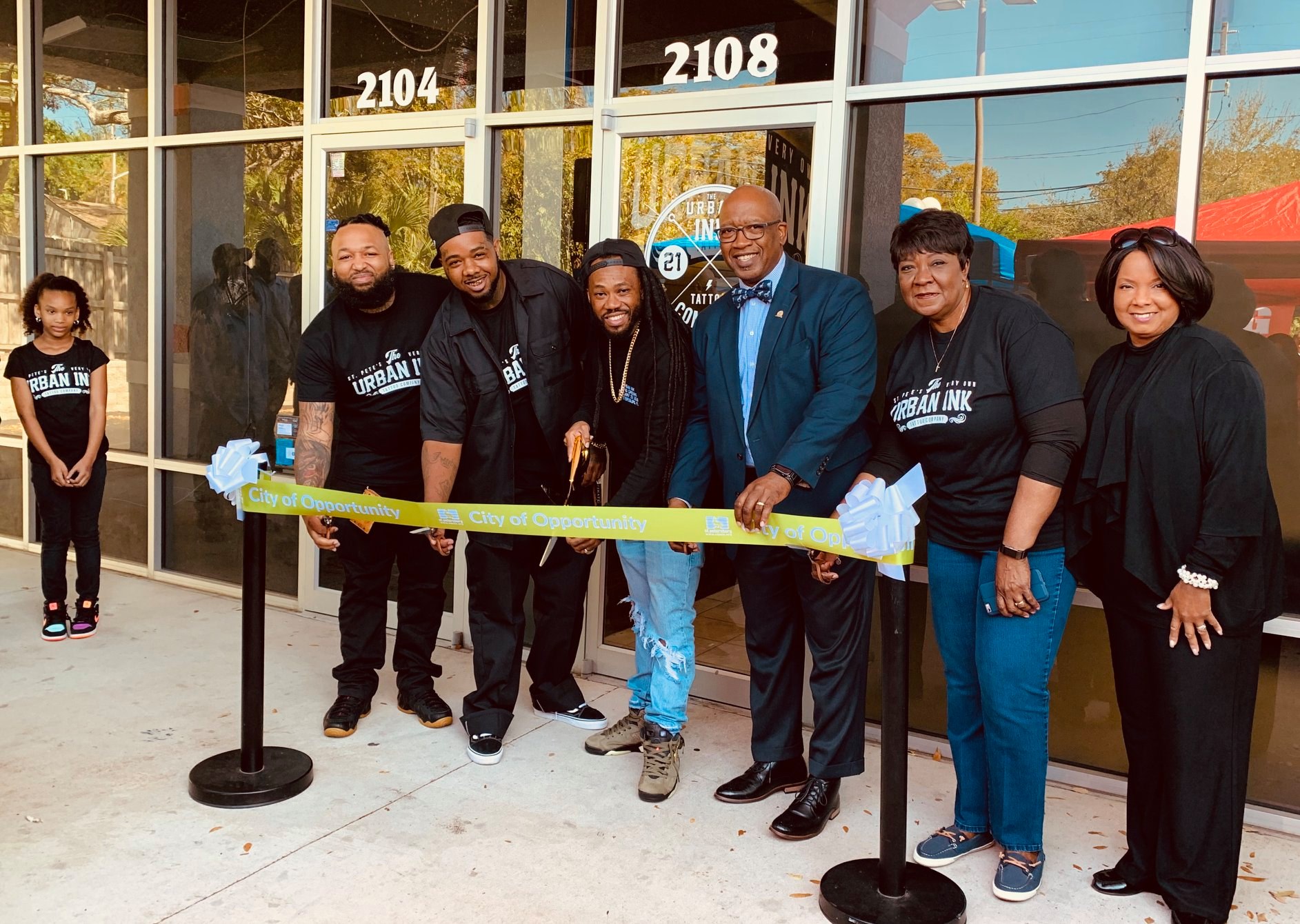 One of Roberts’ grandmothers blessed the occasion with a prayer for protection and prosperity for the Urban Ink team. Pinellas County Commissioner Ken Welch and St. Petersburg City Councilmember Deborah Figgs-Sanders were on-hand for the grand opening.

Welch plans to be one of Urban Ink’s first customers at the new site, calling Roberts a true genius in his remarks. “I’ve known Chris all his life. It’s been a pleasure to watch him pursue his dream with integrity and with perseverance and with passion. Now it’s coming to fruition in this bigger and better location.”

Welch told the audience, “Chris is a strong father and husband and role model for so many in our community…and if you’ve seen his social media commentary, he speaks truth to power.”

The commissioner announced that he and his daughter Kenya will get twin tattoos at the facility for her 18th birthday, later this year (as one of his “bucket list” items).

District 5 Councilmember Figgs-Sanders quipped that she would leave the tattoo-ing to Welch, but encouraged attendees to help Urban Ink go viral with its success, especially in light of the many negative stories about young African American males in local media.

Figgs-Sanders said, “As a Councilmember, I am so elated at Chris’ success, and as a mother of three sons, I am even more excited. Chris, you did it!. There’s no looking back.”

Urban Ink plans to host social occasions at the studio as well. The formal ceremony was followed by a well-attended fight party featuring the televised bout between Wilder and Fury II.