To Pinellas Democrats: 3 Imperatives for Epic Black Voter Turnout in 2020

Posted on March 13, 2020 by Gypsy Gallardo in News, The Black Vote 0 Comments

It’s a little-known fact that St. Petersburg’s black voters grew their vote totals in 11 of the past 12 general elections, and increased their turnout rate in 10 of the 12 cycles as well. But we can’t assume that the boon will carry-over to next week’s presidential primary (or to November), especially countywide.

We will need intentional strategies to engage African Americans this go round, and not just to combat the possible dip in voting due to corona.

We have yet to do a critical retrospective to understand why. Yes, Hillary Clinton failed to excite black voters for a host of reasons, but we now know that many black voters are disgruntled with Democratic party politics overall, and that purposeful disinformation partly fueled distaste for Hillary. Black turnout was dimmed in part by the onslaught of Russian bots and click bait purposefully designed to make some feel “Woke” by refusing to vote.

Not only are we witnessing renewed attempts at black-targeted Russian interference this year, but some local leaders are seeing the mistakes of the past repeat in this year’s cycle.

Speaking to fellow Democrats, here are three tips to help us hold the line come November.

Already the “Never Biden” rumblings have begun, and local Republicans are rejoicing in the strife.

Below is a screen shot of comments to one of my Facebook posts on the imperative of unity. White activist Phil Buck declares “Bernie or bust” while black Republican Calvin Hagins cheers him on. 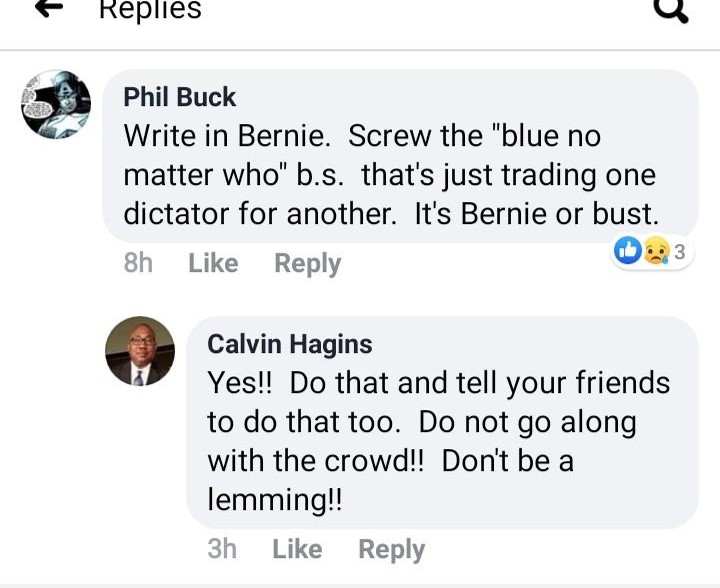 We play into their hands if Bernie supporters take their ball and go home, or if Biden backers fuel the flames of discord by promoting the narrative that Bernie nation is poised to play the spoiler. Time will tell whether Bernie backers withhold their support in significant numbers, but for now, there is no empirical evidence that it’s an inevitable reality.

Democratic leaders would do well to heed the practical advice of former St. Petersburg Councilman Karl Nurse when he wrote “It seems clear that the only way Biden wins in November is if he brings almost all (98%) of the Bernie folks with him. That means Biden has to promise more than rationale, stable, normal leadership. He has to address that lack of economic progress for a huge share the families over a long period of time, not just the last 3 years. A Vice Presidential pick who reaches out to the progressive and younger voters seems critical.”

In all of Pinellas County, St Pete is home to the highest black turnout and the hottest political debate during election seasons, but North Pinellas may offer as big an opportunity to grow the black Democratic vote count.

Although African Americans claim a smaller share of eligible voters in cities like Clearwater, Largo and Tarpon Springs (and hence, receive less attention from Democratic organizers), we’ve failed to recognize two key trends: 1. St. Pete has a shrinking part of the county’s black electorate and 2. African Americans in the rest of Pinellas have outdone St. Pete in voter registrations over the past four presidential cycles. 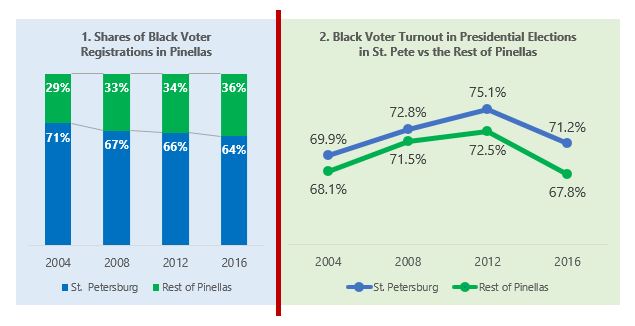 Democrats can see their numbers swell by focusing more registration and turnout efforts in black population centers in the north of the county where African Americans consistently lag their St. Pete peers in getting people to the polls (see Graph 2).

For all the talk of the Amendment 4 windfall to Democratic voting rolls…and all the hype around voter registration, we’re not seeing it here in Pinellas (at least not among African Americans).

Though the number of black voter registrations countywide has increased by a healthy clip over the past three presidential cycles, it hasn’t quite kept pace with black adult population growth.

Fewer African Americans are registered today than in 2012 (as a percentage of adults). Back then, 78.1% of the county’s black adult population was registered to vote. The figure dipped to 75% in 2016 and hovers at about 75.3% as of now.

Local party leaders would be wise to convene the community’s political leaders ASAP, to not only hear their advice, but to heed it (a thing that hasn’t consistently happened in cycles past).