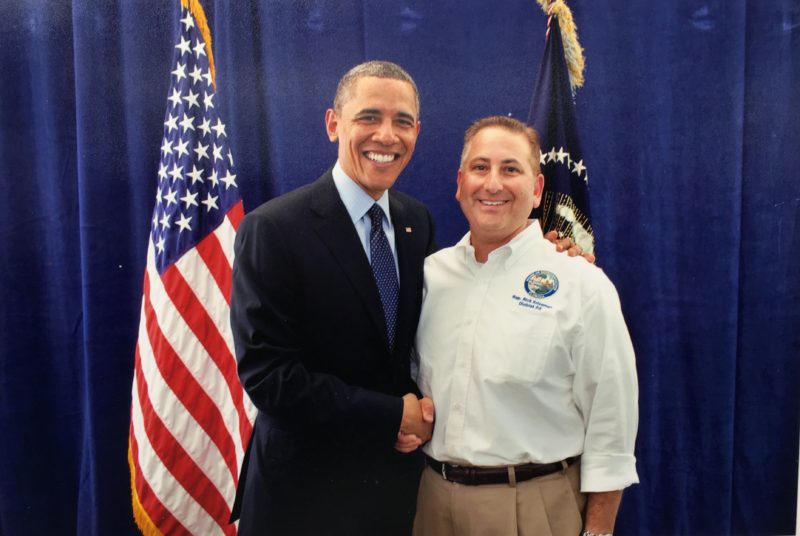 Above: President Obama during a visit to St. Petersburg, with Mayor Rick Kriseman

“As mayor of St. Petersburg, Rick Kriseman has taken on big challenges to move St. Pete forward. From raising the minimum wage and fighting for equality, to bold leadership on climate change, Rick was a great ally on the priorities of my administration. I strongly endorse Rick Kriseman as the only choice for continued progress for St. Petersburg.”   A campaign press release quoted Kriseman saying “I am incredibly honored to have the support of President Barack Obama as we continue our work of moving St. Pete forward. President Obama’s leadership had a positive impact on our city. His historic election inspired us.”

The 44th president’s backing will also likely heighten the partisan energy of Kriseman’s Democratic base.   As Kriseman has proudly noted on the campaign trail, he was one of the first elected officials in Florida to endorse the candidacy of then Senator Obama for president in 2007.

Kriseman’s support for the soon-to-be first black president contradicted the posture of many national black leaders at the time, who chose to back Obama’s opponent – Hillary Clinton – in the 2008 presidential race. Among them were civil rights icon Representative John Lewis and then U.S. House Ways and Means Committee Chairman Charlie Rangel.

The Mayor’s announcement this morning went on to punctuate the synergies in his own policies relative to the former president. “His governance helped us to rebound from a great recession, made healthcare more available and affordable, and expanded opportunity and equality for countless Americans. From ending veteran homelessness to combating climate change, it has been my privilege to champion his priorities and apply them at the local level.”

Kriseman’s policy actions here in St. Petersburg have mirrored the national Democratic debate and platform, including his policy to increase the minimum wage and paid parent leave for city employees, and support for Obamacare enrollment, which Kriseman says helped thousands of St. Petersburg residents to access healthcare.

More recently, Kriseman publicly pledge to uphold the standards of the Paris climate agreement now being dumped by the Trump administration.

Kriseman was among over 100 mayors nationwide who also worked with the Obama administration to adopt the My Brother’s Keeper initiative in St. Pete, which spawned the Not My Son grassroots outreach campaign and the $1 million-plus Cohort of Champions program.