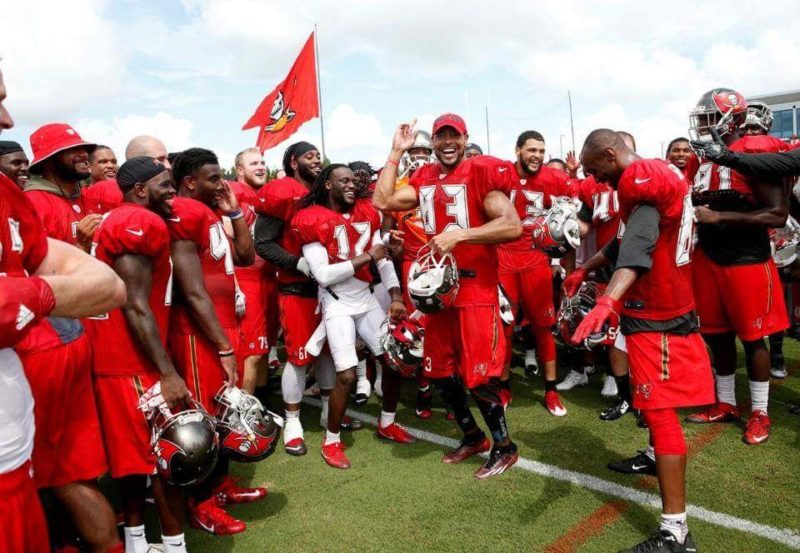 Above: Vincent Jackson (center) surrounded by former teammates with the Tampa Bay Buccaneers

Former Tampa Bay Buccaneer Vincent Jackson was center stage at a press conference last Friday, August 18th, when Mayor Rick Kriseman announced that Jackson and his partners in “The Callaloo Group” had been selected by the administration to lease and operate the historic Manhattan Casino. The two-story facility was vacated last summer.

Jackson and other partners of the Callaloo Group found themselves at the center of a small storm of criticism by people unhappy with the choice.

Jackson joined TheBurgVotes.com team for a far-ranging interview this past Tuesday evening. Interviewed by Power Broker Publisher Gypsy Gallardo and prolific community organizer Brother John Muhammad, Jackson opened up about his roots in a military family, and his personal journey from part-time dishwasher as a student (while earning straight A’s), through an award-winning pro football career, to his stature today as co-owner in seven restaurants.

The three-time Pro Bowler also shared the Callaloo Group’s plans for community partnerships and tentative timelines for grand opening of its venture at the Manhattan Casino, which will include a bar and event space, a Pipo’s Café (serving Caribbean/Floridian fusion food), and catering and commissary services to other Pipo’s facilities nearby.

Gallardo and Muhammad plan to launch an audio clip of the interview late this week with an article posted to three media websites as well. Watch next week’s edition of the Weekly Challenger newspaper for the full-length feature.

The interview team also requested a community reception to be hosted in the near future by Terri Lipsey Scott, Rene Flowers, and others. Jackson enthusiastically agreed. Lipsey Scott will lead the gathering, and plans to host the occasion at the Dr. Carter G. Woodson African American Museum.

She says “I spoke with Vincent personally and feel very positive about his plans for extensive community engagement.” The two have already had first talks about event partnerships between the Woodson Museum and the Callaloo Group.

The Mayor’s recommendation of Callaloo will be presented to City Council for the first time this Thursday. Councilmembers will have to vote to approve the lease agreement before the deal is done.