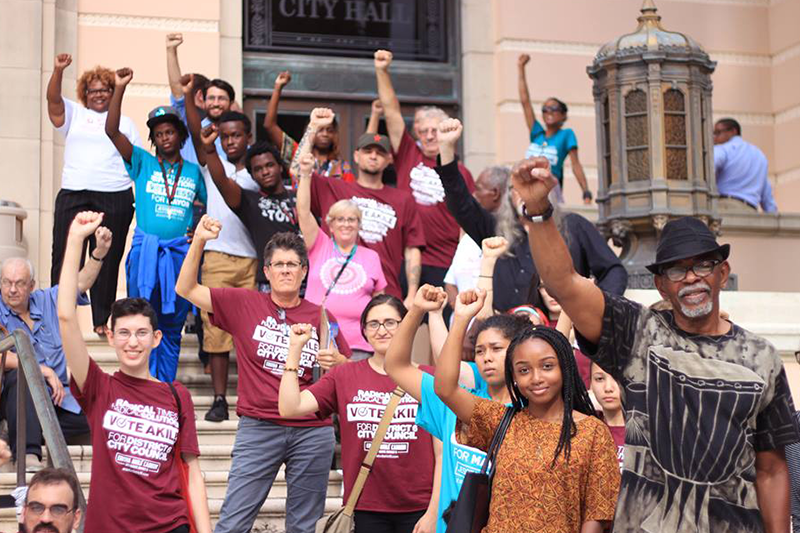 I endorse the campaigns of Eritha Akile Cainion and Jesse Nevel for District 6 City Council seat and Mayor respectively.

They are members of the “Uhuru Movement.” Akile is the bold, responsible 20-year-old black woman who is the chairwoman of the “Justice for the Three Drowned Black Girls” committee.

Jesse Nevel is the 27-year-old white man who is the Chair of the Uhuru Solidarity Movement, an international organization that works under the leadership of the black community for reparations, payback to our people for the hundreds of years of slavery, economic exploitation and political oppression that we continue to experience even today.

However, my reason for endorsing these candidates is not only because of their participation in the Uhuru Movement.

Jim and Brooke Anderson are also endorsing these candidates. The Andersons quit their posts as secretary and treasurer of the St. Petersburg Democratic Party in order to work for the election of Eritha Akile Cainion and Jesse Nevel.

Rose and Jeff Roby and Jeremy Writt are members of the Green Party. Rose Roby is the co-chair of the Pinellas County organization. They all support Eritha Akile Cainion and Jesse Nevel for our next city council representative and mayor.

Most people support Eritha Akile Cainion and Jesse Nevel for reasons beyond their affiliation with the Uhuru Movement.

Most people support Akile and Jesse for the same reasons that I have endorsed them: It is because of their courageous stand against the cruel system of greed, corruption and big money that is destroying all the neighborhoods of St. Petersburg, starting with the black community that is fast disappearing before our very eyes.

Former mayor, Rick Baker is the architect of the gentrification process that is currently devouring the black community.

It was Baker that renamed the black community “Midtown,” to justify his plan to expand “Downtown” from the waterfront in the east to 34th Street in the west.

The “Baker Plan” that he authored is intended to make St. Petersburg white from the waterfront to 34th Street. This is a gentrification plan that is happening under the cover of  “diversity”, revitalization and integration.

Rick Kriseman, the current mayor and other big money candidate has adopted the Baker Plan as his own and, with the support of his chosen black “leaders,” has taken gentrification of our community to new heights.

The Baker Plan under Krisemen’s leadership is responsible for the expansion of high rises and condominiums that overrun the skyline of St. Petersburg and contributed to the over taxation of the sewage treatment capacity of the city, releasing more than 200 million gallons of raw sewage into the water, starting with the black community.

I endorse Akile Cainion and Jesse Nevel because they are continuing the fight for justice and the black community that I started as a young man back when I was known as Joe Waller and ripped the insulting 8 X10 foot mural from the wall of city hall that depicted black people as ape-like caricatures.

I endorse Akile and Jesse because they have bold ideas, the kind of ideas that are needed in today’s world if our children are to know a future.

Jesse is from a Jewish family. The oppression of the Jews has been recognized by the world and Germany has had to pay reparations to the Jews for the crimes committed against them in Europe.

He has joined with Akile in demanding reparations for black people for the crimes committed against black people in the U.S. and in this city where a holocaust museum has been established just a few blocks from a city hall that only provides gentrification and police repression for our people.

I endorse Akile Cainion and Jesse Nevel because they are the only candidates demanding a public policy of economic development specific to the black community and an end to the public policy of police containment of our people.

Akile Cainion and Jesse Nevel have boldly demanded the return of the 85 acres of land extorted from our community with a promise to create light industry for jobs and was used instead to put a baseball dome, even before the city had acquired a baseball team.

With the return of this land that led to that destruction of more than 100 black-owned businesses and displaced 800 families, we will be able to create businesses and real, dignified jobs and decent housing that will take the pressure off the housing market, reducing housing prices for every neighborhood in the city.

The big money people who run this city through stooges and mouthpieces like the two Ricks have no respect for our community or our leaders. They think they can continue to successfully use black faces to lead us to our destruction.

I support Eritha Akile Cainion for City Council and Jesse Nevel for mayor, because those days are over when white power can use black faces to mislead us.

There is a new generation of courageous young black people who are prepared to step to the forefront and continue the struggle started years ago and there is also a new generation of whites who are willing to follow a non-compromising revolutionary stand for justice.

These are radical times that demand radical solutions and real black-white unity through reparations to the black community.