ST. PETERSBURG — The job of mayor, Rick Kriseman said in a 2013 video announcing his candidacy in St. Petersburg, is to be a problem solver. “And best of all, unlike those in Tallahassee and Washington, it’s a job where policy takes precedence over partisanship.”

Fast-forward to this year when Mayor Kriseman, an underdog for re-election, rarely misses an opportunity to remind St. Pete voters that he is a Democrat and his main challenger, former Mayor Rick Baker, is a Republican. Last month, Kriseman had the chance to ask Baker any question in the world during their only televised debate.

“I was working and fighting to get then-Sen. Barack Obama elected president (in 2008),” Kriseman said. “At the time you were mayor of the city of St. Petersburg and you were working and trying to see that Sen. Obama wasn’t elected. You made a comment, you said that Sarah ‘Drill baby, drill’ Palin would be a great vice president. So would you explain why you felt she would make a great vice president?” 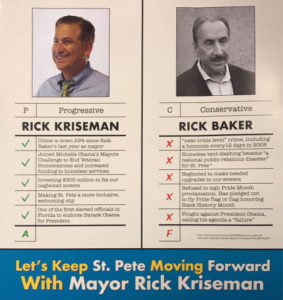 Baker calls that an inconsequential and petty line of attack. Kriseman says it’s a straight-forward question to illustrate Baker’s values and underlying ideology.

Fair on both counts, but party does tell us plenty about a candidate, and pretending it should be ignored or off limits in a campaign is absurd.

Legally, municipal elections in Florida are nonpartisan. Not so many years ago, few St. Pete residents could identify the party registration of their mayor.

That period effectively ended in 2001 when Baker, in his first campaign for mayor, invited Gov. Jeb Bush to headline a fundraiser in St. Petersburg a few weeks after the Supreme Court’s Bush vs. Gore ruling.

The mayoral candidates’ party affiliations are not listed on ballots, but expecting voters to ignore party is as naive as expecting them to tune out negative ads.

“Anyone who has ever knocked on a door for a campaign, in either party, in the last 15 years will tell you it is the first or second question the person answering the door asks,” said St. Petersburg City Council member Charlie Gerdes, a Democrat and Kriseman supporter.

Urban reformers in the early 20th century pressed for nonpartisan elections under the theory that fixing potholes and installing sewer lines are nonpartisan issues, and party machines breed corruption.

Darryl Paulson, who taught politics and urban government for nearly 35 years at the University of South Florida St. Petersburg, said that dubious premise made even less sense in the 1990s as mid-sized cities like St. Petersburg moved from governments led by city managers to full-time “strong mayors” running day-to-day city operations.

“What you end up with is a situation where everyone knows the partisan affiliation of the candidates, but it is illegal to conduct partisan local elections,” Paulson said. “Stop making both citizens and candidates pretend that local elections are nonpartisan.”

That Baker wants to downplay party affiliation and Kriseman wants to emphasize it is a no-brainer.

Like many decent-sized cities, St. Petersburg is progressive and Democratic-leaning. Only a third of voters picking the next mayor are Republican, and nearly 60 percent of the city’s voters backed Hillary Clinton over Donald Trump last year.

Baker, who has long seen himself as a rising star in statewide GOP politics, won’t even say whether he voted for Trump.

At a time when the GOP controls Washington and Tallahassee, cities are the last bastion of Democratic political strength in Florida. Both parties understand that who holds high-profile, elective offices in the biggest battleground region of America’s biggest battleground state has repercussions beyond local water rates.

“Now more than ever, it is critical that we elect leaders like Rick Kriseman who will stand up to attacks from Tallahassee and Washington, and continue fighting for our community,” Murphy said.

Democratic School Board member Rene Flowers, who four years ago supported Republican Bill Foster for mayor and this year supports Kriseman, said Baker can’t on the one hand tout his commitment to a “seamless city” serving all residents well, while at the same time supporting a party where leaders are eager to eliminate health care coverage for thousands of city residents.

Brian Hughes, a Republican consultant who works with Jacksonville Mayor Lenny Curry, thinks the whole debate over partisanship in city elections is nonsense.

“A pothole may not belong to a party, but the philosophy of the person in charge of fixing it matters,” Hughes said. “If the candidate is a labor-endorsed Democrat, their idea of how city services are managed is likely different than a pro-business, conservative Republican. Why wouldn’t those philosophies and the ways they will influence leadership be a factor?”

Most of us prefer nonpartisanship at City Hall.

“What has partisanship gotten us on the national level but gridlock?” asked Darden Rice, a St. Petersburg City Council member, Democrat and Kriseman supporter, adding that Baker made party affiliation fair game by campaigning for high-profile Republicans.

Tampa Mayor Bob Buckhorn, another Democrat and Kriseman supporter, noted that party affiliation tends to “rear its ugly head” more in campaigns for local office than in governing but still is far less important than in campaigns for partisan offices like Congress or the Legislature.

“The connection between a mayor and the people who hire him or her is a very different one than it is for other offices,” Buckhorn said. “It is far more personal. People are better versed on the personalities in a mayor’s race. They know the personalities. They interact with them.”

This point explains why Baker, a well-known Republican, is the front-runner in St. Petersburg’s mayoral race.

No mayor in modern history has won election without strong support from the city’s overwhelmingly Democratic African-American voters, and Baker is better known among black voters than Kriseman. His long-term effectiveness can be debated, but his commitment and attention to Midtown and other heavily black neighborhoods cannot.

An automated poll of 862 city voters conducted Aug. 7 found Baker and Kriseman tied among African-American voters, despite Kriseman doing all he can to remind voters that Baker is a Republican. That St. Pete Polls survey should be taken with a grain of salt because it does not reach voters who use only cellphones, but it also showed Baker winning 30 percent of Democrats and Kriseman just 16 percent of Republicans.

“Party affiliation does not factor in on the ballot, and what I want for my city is the best possible candidate,” said Democratic former City Council member and state Rep. Frank Peterman, who endorsed Baker.

“Rick Baker has proven himself through the prior time he served as mayor. He did a good job for the entire city, especially for the African-American community.”

Kriseman has aggressively pursued plenty of policies to promote his and the city’s progressive image: no longer requiring job seekers to reveal prior criminal convictions; finally adopting curbside recycling; moving to thwart chain stores on Central Avenue; enthusiastically promoting the city’s big Pride festival; and vowing to adhere to the Paris climate agreement.

If Kriseman loses re-election, it won’t be for lack of living up to Democratic ideals. It will be because he did not pay sufficient attention to the fundamentals, especially the city’s sewage system. And it will show he was right in that campaign kickoff announcement more than four years ago.