Younger Voters to Elders: We Want to Do More; Show us How! 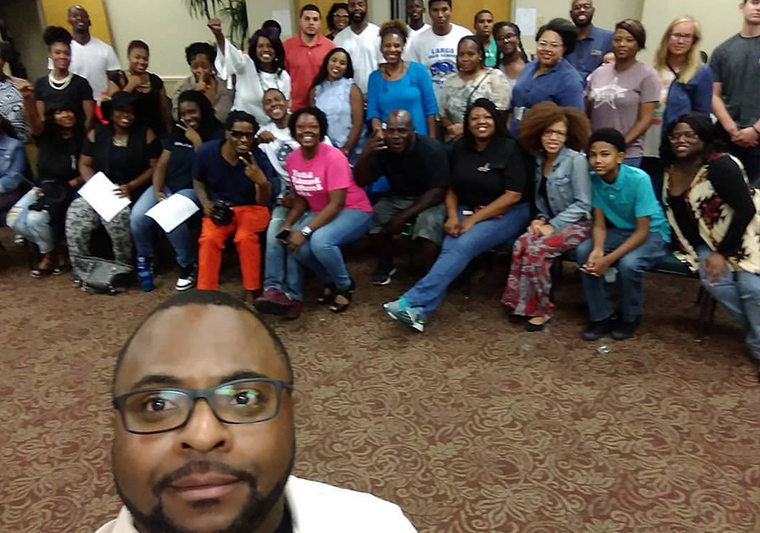 The overwhelming sentiments of young voters who attended last Friday’s (Aug 18th) Millennials Open Mic event at Mt Zion Progressive: We want to do more, but we need education!

Millennials from both sides of the bay convened in Mt Zion’s 2nd floor fellowship hall for dinner and intimate conversation on politics. Topics ranged from voter apathy to whether the group felt informed enough to cast a vote in the upcoming St. Petersburg primary.

The majority answered an unequivocal NO to the latter. Countless attendees stated they felt ill-prepared to vote.  Some said they were unaware of the duties of the mayor.  Others were unsure what City Council’s responsibilities are.  And several echoed that they were waiting for someone to teach them and show them what to do.

The session began with School Board Member Renee Flowers giving a brief history lesson on the origin of the two party system in American politics. The knowledge was greatly received by those in attendance, with several people visibly enrapt. Also on hand to help answer questions were community leaders Carla Bristol, Deborah Figgs-Sanders and Pastor Louis Murphy, Sr.

Afterwards, the conversation jumped right into the open dialogue, which I framed with a relatable metaphor:

“Imagine I brought in a huge cake—your favorite cake with your favorite icing.  I cut a piece and eat it. Then I cut another and another and another, all the while, you are watching the pure contentment and enjoyment on my face.  Then I tell you, don’t worry about having any of this cake.  It’s not good.  It’s dry and it’s not good for your health.  Do you walk away without trying to have a piece?  Or do you stand firm and demand a piece?”

Unanimously, the crowd agreed to stand firm and demand a piece. So what’s so different when it comes to voting? We stand around and listen to countless people tell us our vote does not matter and it will not count. Yet all the while, they are casting their votes in the very same election.

“I just don’t know anything about the upcoming election,” voiced one concerned Millennial, a recurring theme among peers in the room.

And when it comes to voter apathy, there were mixed feelings.  Some weren’t comfortable with the term while others felt that the non-participation of Millennials is intentional.  Others felt the apathy was based on the lack of candidates who specifically address younger voters’ issues.  Regardless of the position, the group agreed that more could be done to engage Millennials.