This is When We Decide What & Who Matters

St. Pete’s mayoral election is giving summer a run for its money with the heat it’s generating.

As a city, we are deciding many, many things. This is one of the most important elections in our city’s history. We are at a crossroads as a community.

Standing at a fork in our shared journey’s path, we will look back on this time as one in which we set up defining parameters for what and who matters in our ongoing ascent to world-class city status.

Our history shows us that we’ve traversed such times before…sometimes getting it right with decisions such as the early one that established a public waterfront parks system that preserves access for all to our city’s most valuable land, and sometimes getting it wrong with decisions like those that preserved the cowardly cloak and culture of segregation for too long in the 1950s and 60s.

This mayoral election is not only about two men. Six people are running, and their reasons why signal that this election is not a referendum on our city’s next four years, but our long-term future.

We’ll look back in time and realize that this race was when we decided how long it will take the undeniable hope, optimism and opportunity, that is symbolized by St. Pete’s shining sun, to be felt as strongly south of Central Avenue as it’s felt elsewhere in St. Pete.

It will be when we decided whether we would authenticate that shine by continuing to build up our people who need help, not just our places.

We’ll look back on this vote and come to understand that this is when we decided where small businesses, artists and entrepreneurs will stand on St. Pete’s evolving economic landscape…one that inevitably will include more big businesses and developers, who need no help or permission for access.

And, this is when we’ll decide whether, as a result of that understanding, we’ll place disproportionate concern, focus and resources, where they are needed.

We’ll look back on this election with gratitude or regret about how high we raised our voices to say it DOES matter for whom and what we raise our flags, as those flags wave as a reflection of our consciousness and commitment to everyone in our community. It DOES matter where we march, whether for Pride or for women, as every one of those steps move us forward. It DOES matter with which state and national leaders our local leaders identify, because shared philosophies produce similar goals and outcomes.

This year’s vote will tell us whether we have the collective courage, confidence and conviction to anchor our coastal city’s resilience in long-term planning that acknowledges the real and rising concerns of climate change and the waters that flow with it.

In many ways our elections this year will serve as a mirror for our city’s soul.

We’ll hear the voiceless, who feel they are never heard, say, “Why do you so badly want me to speak up now? I’ll keep my voice and vote to myself.” And, if we are smart, we’ll come to know that our inclusion and diversity MUST include those who live, think and dream differently than we do. And, we’ll work together to get more people registered and more rights restored, for every election that follows; while shifting the meaningful discussions that emerge during elections from an every-four years mandate to a constant community dialogue.

The most authentic way to understand which of our candidates will help our community best find its way through these and so many other defining considerations, in a way that reflects who we are and who we want to be, is not with campaign materials. 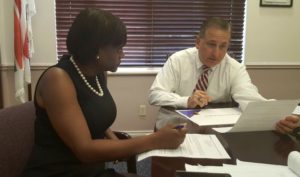 I invite you to look at the work of the Kriseman Administration before any candidacy was declared – examine what we were doing, what we were saying, where we were investing, and for whom at any point over the past four years.

Read our three years of annual impact reports, our Urban Affairs impact reports, and Mayor Kriseman’s State of the City addresses. Look over the lists that range from St. Pete being ranked a best-run city to fiscally strongest to one of the top places to visit.

Comb through our website and compare our city’s image, transparency and access before versus now. Examine the makeups of our citizen advisory committees and boards. Analyze the policies and ordinances that have been created, and further modified to ensure they deliver on intent. Then decide.

One thought on “This is When We Decide What & Who Matters”